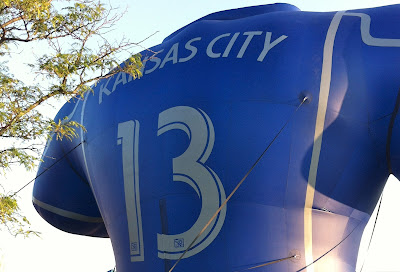 *Bobby and Pamela Baskin-Watson are one of the "create couples" examined by KCUR.  (Via Tony's Kansas City.)

*Will Friedwald defends the location of this weekend's Charlie Parker Jazz Festival in his preview of the star-studded event.

*The Charlotte Street Foundation has posted the schedule for Black Lab: A New Music Festival.

*Dominique Sander's new single "Isoar" is recommended if you like the Pat Metheny Group, Bobby Watson and Jaco Pastorius.

*An extended clip of Eddie Moore and the Outer Circle's recent performance at the Blue Room has been posted at Soundcloud.

*Matt Kane's Suit Up! was reviewed by Audiphile Audition.

*Incitare, a jazz fusion album by Volto!, was released two weeks ago.  The Kansas-born Danny Carey is the band's drummer.

*Comment o' the Week: Lori Chandler- Saul, your assumptions are incorrect. I can assure you the musicians that play Take Five do not play for pastries. We have ALWAYS compensated our musicians; even when we first started, even when the crowds weren't there. Now they get 100% of door and still have a minimum guarantee to protect them against off nights. We consider the musicians that play Take Five as part of our family. If you have questions about it, perhaps ask one of them, or ask me directly.

*From Take Five Coffee: Here's a weekend to get your mind blown. At Take Five Coffee + Bar we get to host some of the most exciting talent, young and old, that Kansas City's music scene contains. This weekend serves as a three-day showcase to prove the point.  Friday evening, get in early, then hold onto something solid because here in the intimate confines of our little coffee lounge, we'll have a force of nature called Parallax. Trumpet titan Stan Kessler lets his wild side out for this group, blowing original tunes as fierce as a thunderstorm on the open prairie. Seasoned veterans Roger Wilder on the Rhodes and Bill McKemy on bass and sousaphone counterbalance the young stunt drumming duo of Brian Steever and Ryan Lee.  Saturday evening, it's the Young Loins of Jazz. Maybe the name started with a typo, but this group certainly brings the visceral power to back it up. Micah Herman, a ferocious bassist who doesn't get heard often enough, leads a cluster of rising stars: Hermon Mehari on trumpet, Steve Lambert on winds and Brian Steever on drums.  Sunday evening, to wrap things up in a perfect way, two of the city's deepest players will present an intimate duet set. Bassist Bob Bowman and guitarist Danny Embrey have the chops and interplay that only come with decades of devoted artistry.  Friday and Saturday shows start at 8pm, Sunday starts at 7, each night the cover is $5.

*From a press release: Kansas City groups, The Project H and Eddie Moore & The Outer Circle will perform together on Saturday, August 24th starting at 7pm at the mBird Media event space (2936 Cherry) in a concert open to the public.  The concert is $5 to attend features two of the most popular jazz groups in the area. Attendees are encouraged to bring their own lawn chairs and their own beverages.  The Project H will open up at 7pm and will showcase several new original compositions by trombonist, Ryan Heinlein. Eddie Moore & The Outer Circle will start at approximately 8:40pm and will feature original compositions by pianist, Eddie Moore.  The Project H consists of Ryan Heinlein (trombone), Clint Ashlock (trumpet), Brett Jackson (woodwinds), Jeff Stocks (guitar), Andrew Ouellette (keyboard), Dominique Sanders (bass) and Matt Leifer (drums). This group was nominated for "Best Jazz Ensemble" by The Pitch in 2012 and has shared the stage with groups such as: The Bad Plus, Snarky Puppy, Monophonics, Rebirth Brass Band and Big Sam's Funky Nation. Their second album, "Become Light", was named the second best local jazz release by the Plastic Sax blog.  Eddie Moore & The Outer Circle consists of Eddie Moore (piano), Dominique Sanders (bass), Matt Leifer (Drums) and Matt Hopper (guitar). Moore was recently nominated for "Best Jazz Soloist" by The Pitch. Eddie Moore & The Outer Circle are currently supporting their debut recording, "The Freedom of Expression."

With a 9 to 5 day job I could probably afford to gig at Take Five or Harlings. But unfortunately my Bachelors degree in Jazz Studies is a worthless degree. Not qualified to do anything with it except play my butt off. Could have done that without the degree. Glad I found out after I graduated. Thats ethical discussion for another time.

Kansas City used to be a (mostly) no cover charge town. People wouldn't pay them. Drinks now cost more, night club rent is higher, the food they serve cost more and they pass that on to the customer, utilities are higher....The club owner is willing to charge more and pay more for everything that relates to their business but actually pays the musician less than what was paid in the 1980's. Oh yeah and now its the musicians responsibility to fill the room.

The club owners can write off their losses. Why not up the musicians pay and write that off. If you pay 2013 prices to run a business then take inflation into what the musicians should get paid. That would be something to be proud of. If the music is the draw than pay the musicians a wage that is commensurate with their skills, training etc. You don't pay the plumber or electrician or your other vendors "the door" or a minimum to work for you.

Why should the musicians be treated any differently.
Michael

Because we are not plumbers or electricians. I think most people who are not musicians would argue that our skill-sets and services occupy the tippy tippy top of Mazlow's heirarchy. One can live a secure and comfortable life without going out to see musicians every night. I mean face it, It's not like our skill-sets and services and the fancy thoughts we get to think as musicians are on par with "gotta eat, need a roof, jeez its cold i need clothes, gotta eat, the rent is too damn high, and etc"

We also have the detrimental benefit of recording. Music has been a noun for quite some time now. You have a tangible artifact that will be exactly the same each time you listen to it (which is whole other psychoaucoustic issue). Music a long time ago used to be a VERB that EVERYONE in the community participated in. Stomping and clapping and dancing and yelling and trancing and all the rest of the ecstatic behaviors the humans display. This is not to say that this doesn't happen today, but what I'm really saying is most people have absolutely zero awareness of the visceral reaction their bodies have when listening to musics. The whole mind/body thing and the cognitive and physiological magic that is music. (which is why we, musicians, do it)

As many a pundit would decry "we are losing our culture!" or "America is being poisoned" and etc, in some sense is correct. Communities are not what they once were, and music has shifted to a much more private experience, so the importance of the musician, that person or family who you sought out when you and your friends wanted to get together and dance around and drink fermented honey and etc, has become as a throwaway person or thing, filling a temporary hedonic want because you find them soothing or agitating until your attention flits to another place then another then another, and your musical experiences are nothing but an interrupted series of snippets.

Lack of attention span, lack of physiological and social awareness, and the relentless crush of capitalism for cheap. And I don't even want to touch the "anyone who doesn't fulfill Jazz Quests 1-10 is going to burn forever in hellish environs and we shall forever scorn them" debate that people like to rage about.

Bottom line, capitalism. Musicians have/want/need to spend so much time honing their technique that, unless they have inexhaustible amounts of energy to keep up with the entrepenurial demands of succeeding, something is gonna slack.

You make good points and I'm exhausted reading that post. Suit yourself. The musicians making a respectable living playing jazz in this town (and there are at least ten off the top of my bald head) work 9 to 5 working the business side of their craft so they can get paid well for playing jazz. Thats not "inexhaustible energy" as you call it. Its called personal responsibility or taking ownership of their career..... something that should be taught in a jazz degree curriculum. A lot of the musicians I know in this town sleep late and are not productive during the day. Thats fine. But those are also the cats playing for free or $50-60. As long as they play for that kind of compensation it hurts the scene and the diminishes the value of their craft.
Michael

Michael, could you at least sign your full name and really identify yourself so that nobody confuses your curmudgeony, depressing viewpoints with mine?

By the way, Take Five pays very fairly. Actually, MORE than fairly when you consider they are mostly in the coffee business and don't have too many $100 liquor tabs to count on. Do a little research before you slander good people who care about the scene. And while you're at it--maybe go outside, make some friends, book a gig and have fun on it every once in awhile.

By the way: the worthlessness of your jazz degree is nobody's fault but yours.

Not hurting too much for gigs (could always use a few more)...thank the lord or friends or joy in my life. Not going to give it away either.
You are correct though, I have no one to fault but myself for getting that jazz degree...except maybe my advisor at Eastman. Ultimately it was my decision.
Michael