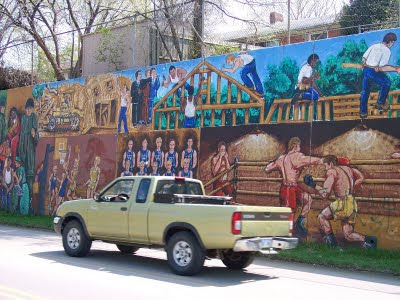 *KCJazzLark reports that the Mutual Musicians Foundation continues to pack 'em in.

*Pat Metheny receives lavish praise from The Guardian. The guitarist also announced a tour of "intimate venues" with bassist Larry Grenadier this fall. There's no word on a hometown date in Kansas City.

*A blogger shares his notes on a recent Snuff Jazz performance.

*Another blogger wrote a mini-review of a recent performance by Roger Wilder's band at the Blue Room.

*A new post at the blog of the Kansas City Jazz Orchestra promotes an April 29 appearance by Gary Foster.

*From Jim Mair: The unbeatable combination of great jazz and great barbecue will be the order of the night for the annual Jazz Cabaret at Kansas City Kansas Community College Thursday, April 28. One of the highlights of the first ever Jazz Summit to be held on the KCKCC campus at 7250 State Avenue, the Cabaret will kick off at 5 p.m. with a “Mocktail Happy Hour” featuring jazz vocalists in the lower level of the Jewell Center. Details are here.

*The 2011-12 season of the Performing Arts Series at Johnson County Community College has been announced. It includes Ambrose Akinmusire, one of the most buzzed-about names in jazz. Here's a list of the jazz-related events in the series: 9/30- The Miles Davis Experience featuring the Ambrose Akinmusire Quintet 11/12- Max Weinberg; 12/03 Turtle Island Quartet; 12/16- Burning River Brass Band; 1/21- Poncho Sanchez.