The starpower at Kansas City jazz clubs will be slightly dimmer than usual for much of February.  Many of the town’s heavy hitters are part of the ”Big Bands Are Better” production at Musical Theater Heritage.  The show opens Thursday, Feb. 7.  All of February’s jazz gigs are posted at The Kansas City Jazz Calendar.
Posted by Happy In Bag at 9:38 AM No comments:

*Lori Chandler ponders the relationship between jazz performers and audiences.

*An outing by Havilah Bruders and Charles Williams is praised by a blogger.

*Chris Burnett is profiled by The Leavenworth Times.

*Joe Dimino documented the Yellowjackets’ concert at the Folly Theater.  He also attended a jam session hosted by the Waldo Jazz Collective.

*Tweet o’ the Week: KansasCityJazzCynic- It seems as though if it were not for the support from other jazz musicians, this city would have no support for their jazz musicians.. 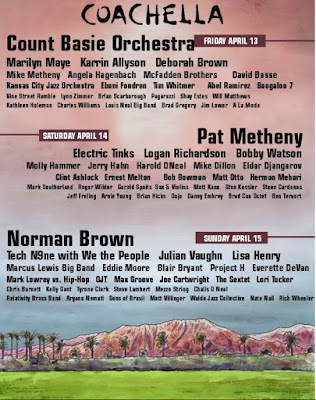 What would an optimal three-day festival consisting of jazz artists based in or affiliated with Kansas City look like?  I used a Coachella lineup generator to answer that question.  While it’s marred by unfortunate omissions, I’m pleased by my effort.  I was forced to rearrange the order of the lineups and make a few odd name abbreviations to fit the template.  For instance, Tech N9ne backed by We the People should be the headliner of the groove-centric third day, but the number of characters didn’t fit.  Neither was I able to indicate that I wanted the Kansas City Jazz Orchestra to back Marilyn Maye on the swing-based opening night.  Three-day passes to the hypothetical event in the Crossroads Districts are $125.  Single-day admission is $50.
Posted by Happy In Bag at 11:37 AM No comments:


Havilah Bruders is among the many Kansas City musicians who flit between genres.  The vocalist is known to the rock community as a member of Cadillac Flambé.  Theatergoers know Bruders for her appearances in musicals.  Bruders will display her jazz artistry at Chaz on Friday, January 25, and at a jazz brunch at Johnnie’s Jazz Bar & Grille on Sunday, January 27.  All of the region’s listings are posted on The Kansas City Jazz Calendar.
Posted by Happy In Bag at 9:12 AM No comments: 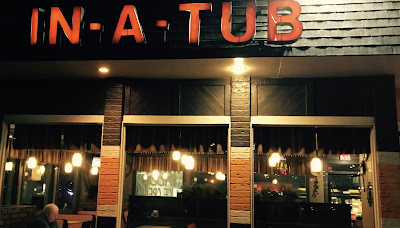 *The Leavenworth Times follows up on its initial story about the 424 Lounge.

*Tweet o’ the Week: Christian Swan: BOOM SHAKA LAKA, GOD IS GOOD! The CUR3 is taking off today for it's first trip to LA. We will be playing at NAMM for CTMonitors and networking throughout the city. If you'll be at #NAMM, catch us at booth #15728. 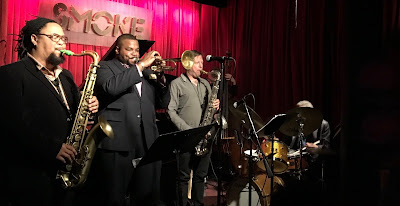 I hugged Al Foster last night.  Anyone familiar with my Asperger’s-like traits knows such embraces are out of character for me, but the extraordinarily gracious drummer seemed to enjoy greeting well-wishers at the conclusion of the last of three sets at Smoke Jazz & Supper Club.

Less than 20 people heard the vital set by the auspicious musicians.  The $40 cover and $20 bar minimum were prohibitive.  Sure enough, a couple dozen people poured into the club for the subsequent free after-midnight set by a band of young musicians who took advantage of the opportunity to impress Foster.

(Original image by Plastic Sax.)
Posted by Happy In Bag at 7:34 AM No comments:


Vocalist Lisa Henry will join a quartet led by keyboardist Eddie Moore at Polsky Theatre on Sunday, January 20.  The concert is part of the Winterlude series at Johnson County Community College.  It's one of 17 events on Sunday listed at The Kansas City Jazz Calendar.
Posted by Happy In Bag at 10:05 AM No comments: 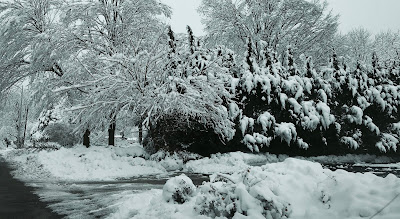 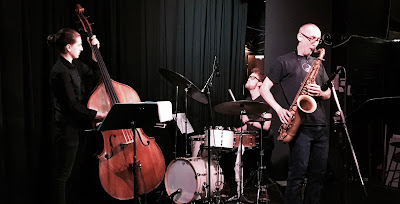 Trevort judiciously gave his bandmates free reign.  Listening to Otto delineate the melody of a ballad is akin to watching a masterful Japanese artist paint a wondrous landscape.  And every time I see Steever perform I’m certain that he’s my favorite drummer in town.

Unlike in New York City, attending Tuesday’s show didn’t require navigating a subway system, paying a drink minimum or battling a crowd.  In fact, all of the people who paid the $10 cover to catch the first set could have fit inside a taxicab.  It’s too late to cancel my forthcoming trip to New York, but Tervort’s adventurous endeavors in Kansas City may play a decisive role in my subsequent travel plans.

(Original image by Plastic Sax.)
Posted by Happy In Bag at 11:05 AM No comments:


New York Voices will perform at Community Christian Church on Tuesday, January 22.  Details are available here.  Out of respect for the event’s organizers, I elected not to embed the group’s “colorful” rendition of “Traffic Jam.”  Every area jazz performance is listed at The Kansas City Jazz Calendar.
Posted by Happy In Bag at 3:42 PM No comments:

*Ernest Melton is featured at the site of Quincy Jones' streaming entertainment startup Quest TV.  The photo that accompanies the article looks familiar.

*Not a single release by a Kansas City artist earned a spot on the list of the Top 50 albums in The 2018 NPR Music Jazz Critics Poll.

*The man behind Plastic Sax extolled Logan Richardson on KCUR’s Up To Date program last week.

*John Stafford spoke to Joe Dimino about the new album by a vocal ensemble at Kansas City Kansas Community College.

*In her guest editorial about the Open Spaces festival for The Kansas City Star, Anne Gatschet writes that “(t)ourists are unlikely to say, ‘I’m going to Kansas City. Can’t wait to see the Mutual Musicians’ Foundation.’”

*Tweet o’ the Week: Ryan Heinlein- Pretty remarkable to neither honor the tradition or be forward thinking at all. That’s how this dies.

*From a press release: The Kansas City Jazz Summit will take place April 23 - 26, 2019. This event caters to middle school, high school and college jazz bands, combos and jazz choirs and will take place at Kansas City Kansas Community College. The festival will highlight Kansas City's rich jazz heritage through the "Basically Basie" Jazz Heritage Competition. Bands are judged on their ability to capture the essence of the Kansas City style as best exemplified by the Count Basie Orchestra. There is also a non-competitive category (Summit) that allows bands to showcase their own unique style and personality.

Peter Schlamb: The Plastic Sax Person of the Year 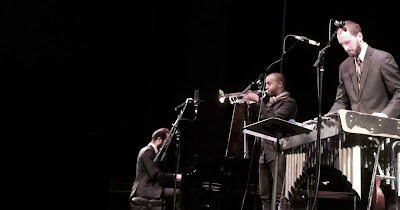 Peter Schlamb has been feverishly praised at Plastic Sax since his name was first mentioned at this site in 2010.  Almost every one of the rave reviews garnered by the brilliant vibraphonist is entirely organic.  Schlamb doesn’t promote his work.

Schlamb’s stellar seven-song EP Electric Tinks was furtively released a few weeks ago without a smidgen of publicity.  Schlamb doesn't even list it at his site.  Yet in my review of the EP- the sole critique the project has received- I assert that Schlamb’s plugged-in vibraphone is “the most compelling sound of the past few years” in Kansas City.

It’s not an accident that the arrival of the St. Louis transplant has coincided with the artistic renaissance of Kansas City’s jazz scene.  That’s why Shlamb is the Plastic Sax Person of the Year for 2018.  Mum’s the word.


It’s going to get loud at the Ship on Saturday, January 5.  Earl Harvin and Mike Dillon are likely to make a racket akin to the percussive workout in the embedded video.  Two dozen additional jazz gigs on Saturday are listed at The Kansas City Jazz Calendar.
Posted by Happy In Bag at 2:40 PM No comments:

*WBGO shares a new version of Bobby Watson’s “In Case You Missed It.”  The selection is from a forthcoming album by the Ralph Peterson Messenger Legacy band that includes the Kansas City saxophonist.

*Tweet o’ the Week: Weldon Williams- A decent treatment of jazz in Kansas City, it showed more like a kiddy museum than a serious destination. (link)

(Original image by Plastic Sax.)
Posted by Happy In Bag at 8:54 AM No comments: