Album Review: Ernest Melton- The Time of the Slave Is Over 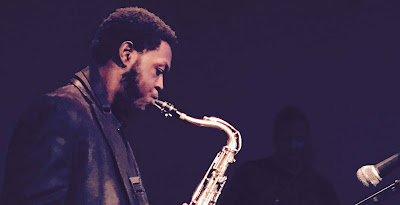 Ernest Melton has arrived.  After years of raving about the young Kansas City saxophonist without much tangible corroboration of my enthusiasm, I was beginning to think my advocacy was misplaced.

The Time of the Slave Is Over- Melton’s second release of 2018- indicates that his potential has been realized.  Filled with righteous fury, the album acts as a dangerously disruptive undercurrent in the tranquil sea of civility that dominates Kansas City’s jazz scene.

Much like Blues People, the most recent statement by the divisive Kansas City saxophonist Logan Richardson, the unpolished The Time of the Slave Is Over is loud and abrasive.  There’s nothing polite or accommodating about the confrontational album.  Even the ballads possess lacerating edges.

The aggressive funk accents provided by bassist DeAndre Manning and drummer Brad Williams cause The Time of the Slave Is Over to resemble the brash work of the London based innovator Shabaka Hutchings more than the calibrated bop of the hometown hero Bobby Watson.  Melton has thrown down the gauntlet.  Will his peers in Kansas City accept the challenge?