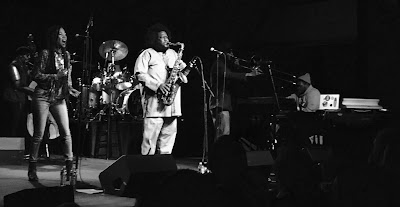 I thought I was about to attend a cosmic jazz recital as I paid $35 to enter the Truman on Monday, October 29.  Instead, I participated in a jam band jamboree. With two drummers, a hippie-chic aesthetic and a penchant for blustery solos, the groove-oriented seven-piece ensemble led by Kamasi Washington resembled the output of the elite jam-oriented group the Tedeschi-Trucks Band.  Rather than mirroring Derek Trucks’ evocation of guitarist John McLaughlin, saxophonist Washington roared like John Coltrane.


Uptempo selections elicited ecstatic dancing amid the audience of more than 500, while subdued material that sounded like heavily amplified variations of A Love Supreme induced peaceful meditation.  Even though it wasn’t quite what I expected, I admired almost everything I heard during the 75 minutes I spent at the show. The presence of keyboardist Brandon Coleman provided a sonic link to Washington’s more electronic-oriented compatriots Flying Lotus and Thundercat.  The cross-disciplinary bassist Miles Mosley anchored the band while the exaltations of vocalist Patrice Quinn aroused mass euphoria.


Cynics who insist that Kansas City is home to many saxophonists who are more technically accomplished than Washington are probably right.  So what? Washington has perfected a maximalist concept that renders scholastic aptitude irrelevant.  Monday’s concert proved that his status as the world’s most popular jazz musician under the age of 40 is entirely warranted.


(Original image by Plastic Sax.)
Posted by Happy In Bag at 3:15 PM