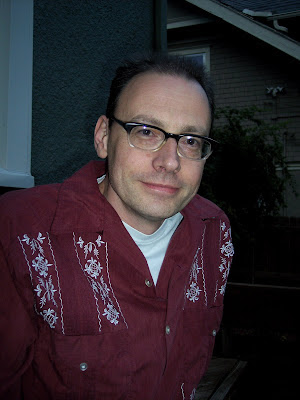 This broad-shouldered intellectual is Lee Ingalls. Public radio listeners are familiar with his mellifluous voice in his capacity as KCUR's morning anchor, reporter and jazz critic.

It's telling that I first met Ingalls at a UMKC jazz jam at Mike's Tavern. In addition to being an absurdly nice person, he's a knowledgeable and deeply passionate fan of jazz.

So it's with great sadness that I report that Ingalls is moving to Chicago at the end of this week.

Although I hope I'm wrong, Ingalls' departure represents the end of jazz on KCUR. Ingalls hosted the station's Just Jazz program after long-time personalities Ginny Coleman and Ruth Rhoden's retired. Since that show's demise, the station has broadcast Ingalls' profiles of local jazz events and artists. He has also made regular appearances on Steve Kraske's Up To Date to review recent jazz releases.

Can anyone at KCUR fill Ingalls' shoes?

I admire reporter and producer Sylvia Maria Gross' off-the-chart smarts and engaging personality, but I hold her responsible for the recent controversy at the Mutual Musicians Foundation. As I learned when I mentioned it to her, Gross was oblivious of the unwritten rule among jazz fans and drinkers to never speak publicly of the Foundation's late-night liquor situation. Her broadcast led to the government crackdown.

I'm not demanding that KCUR drop its news or classical programming to focus on jazz. The internet and satellite radio have rendered conventional music broadcasting obsolete. I do feel, however, that KCUR has an obligation to regularly cover the local jazz scene. Just up the dial, KKFI offers some fine jazz programming, but the community station lacks both KCUR's reach and resources. Area jazz musicians desperately need and merit KCUR's support.

You're going to be missed, Lee.

(Original photo by Plastic Sax.)
Posted by Happy In Bag at 12:57 PM

Not to intrude on my own encomium, but I don't think it's fair to blame Sylvia for the Foundation's troubles with the law. The crackdown happened in September; her piece aired in December and was inspired by the crackdown. And not to be a Pollyanna, but look what's come of it: the Foundation garnered a huge amount of sympathy and publicity and ultimately some pretty valuable pro bono marketing help from Sullivan Higdon Sink. Now all they need to do is make jazz interesting to a wider, younger audience. No mean feat, as this blog repeatedly makes clear.

That aside, thanks for the kind words about me and my labors (although I'm not sure I'd describe my shoulders as broad).

Regarding the whole wither jazz question, like the Guide says, "It's always darkest just before it goes completely black."

If you'd like, you can send Lee Ingalls out with a bang today at 11 am. It will be his last time on the air on KCUR, pitching for the membership drive. You can also express your views about jazz programming on KCUR.

"KCUR's membership drive continues today with our Up to Date-only premium offer: If you pledge during today’s program you can receive two canvas grocery bags – to use over and over again at your local store – reducing your need for plastic or paper bags. We’re filling these bags with locally-made goods and services. THIS HOUR IS YOUR LAST CHANCE to get the grocery totes. Call 816 235 5287 – or pledge online with your commitment of $150 or more to receive these gifts.

Our thanks to the fine folks at Farm-to-Market Bread, Eden Alley, Good Natured Family Farms, the Tivoli, and Shatto Dairy for their generous donations!"

That's not the way I remember the sequence of events leading up to the Foundation controversy, Lee, but I'll defer to your superior judgement.

I think Dean Hampton should take over for Lee.