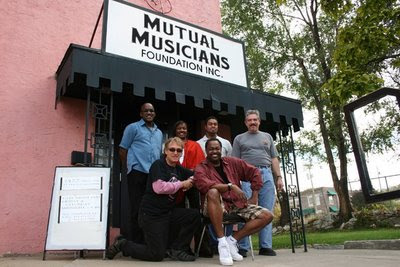 *A potentially incredible event is scheduled to begin at midnight Saturday (Sunday morning) at the Mutual Musicians Foundation.

12 O'Clock Jump is billed as a "free one hour live show... featuring the music of celebrated alto sax player Phil Woods and is presented by Theater League." Hosted by weatherman Bryan Busby, the event will include David Basse, Joe Cartwright, Tyrone Clark and Mike Warren. Two comedians and a "cutting contest" are also part of the bill.

A press release offered few details, but Plastic Sax conducted a brief email interview with a Theater League spokesperson. I learned that Phil Woods will not be appearing in person; "Bobby Watson is our guest artist, performing numbers by and associated with Phil"; the Theater League is funding the program; and that they "hope to go weekly" with 12 O'Clock Jump "by next July."

*It's tempting to read too much into a Star reader's recollection of his failed bid to create a giant saxophone in 1980s Kansas City. It's almost impossible to imagine a similarly ambitious jazz-related idea receiving any serious consideration a quarter century later.

*Jardine's warns that reservations are "a must" for Eldar's stint at the club November 16-20.

*Bebopified defends Eldar's new direction in a review of a recent show. It sounds as if staunch traditionalists will be challenged by the former Kansas Citian's new approach.

*Back To Rockville asked the author of 1,000 Records To Hear Before You Die to provide a list of "the five most essential recording artists from Kansas City." He named Charlie Parker, Bennie Moten, Jimmy Rushing, Lester Young and Big Joe Turner.

(Photo provided by the Theater League. And a loyal Plastic Sax reader merits special thanks for the tip on 12 O'Clock Jump.)
Posted by Happy In Bag at 4:37 PM