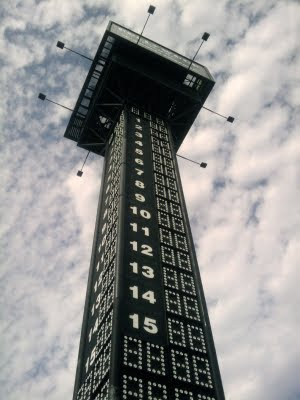 A knowledgeable friend doesn't share my enthusiasm for the American Jazz Museum's bookings for the 2011-12 Jammin' at the Gem season. Most of the artists, he notes, regularly perform in Kansas City. That may be true, but I don't mind repetition when musicians are of this caliber. The only truly disappointing aspect of the new season is the apparent reduction of the series from six to five concerts.

Joe Lovano & Us 5 featuring Esperanza Spalding- October 21
Will she or won't she? Esperanza Spalding was a no-show at Joe Lovano's May 7 concert at the Folly Theater. I absolutely adore the woman I call "The Future," but her presence won't make or break this gig. Lovano's spring concert was one of my favorite shows of the year and his current Bird Songs release is guaranteed a spot in my year-end top album list.
Grade: A

Roy Ayers with Jessica Care Moore and Louis Reyes Rivera- February 11
Forty years after its release, Roy Ayers's classic album Ubiquity has never sounded better. The advent of underground hip hop and neo-soul have rendered Ayers' old music new again. Hits like "Everybody Loves the Sunshine" have become, well, ubiquitous. (And yeah, I don't know who Jessica Care Moore and Louis Reyes Rivera are either. I'm counting on them to stay out of the way.)
Grade: A-

The Geri Allen Trio with the Tierney Sutton Quartet- March 24
I don't get it. Geri Allen is a left-leaning pianist. Tierney Sutton is a mainstream vocalist. The only thing the two jazz artists have in common is their gender. I regularly lobby for more jazz double bills, but this combination is just plain odd. Most members of the audience will probably enjoy either Allen or Sutton but not both.
Grade: B

Stefon Harris and Blackout- April 13
Stefon Harris, as I like to say, "gets it." He understands that jazz doesn't exist in a vacuum. Blackout's funk-oriented 2010 concert at White Recital Hall was truly exciting. While I don't ordinarily comment on hypothetical engagements, it's not a slight on Blackout to suggest that Harris' new Ninety Miles project would have represented an even more intriguing booking.
Grade: A-

The Sun Goddess Tour featuring Ramsey Lewis and His Electric Band- May 19
Ramsey Lewis' acoustic trio concert at the Jammin' at the Gem series in 2006 was very nice. This outing will be completely different. A collaboration between Lewis and Earth, Wind & Fire, the disco-inflected 1974 album Sun Goddess is a personal favorite. Lewis talks about revisiting the project during the forthcoming tour here.
Grade: A

(Original image by Plastic Sax.)
Posted by Happy In Bag at 9:53 AM

The Folly series sucks dick compared to this!

These are all great bookings. I've never checked out much Roy Ayers but I know I should.

Tierney and Geri are different but they're both great and I don't think they're too far removed to share a bill.

This, to me, is an A+ season. Usually there's at least one SUPER commercial wanker but the closest thing is Ramsey Lewis and he's amazing. Is EWF actually going to be on the gig?

Please say what you feel about the Folly series....no sugar coating allowed.