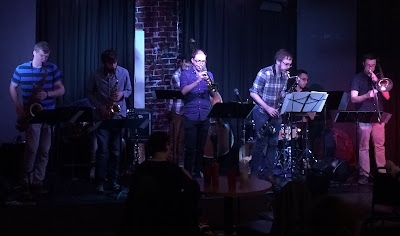 Glad to see Drew bringing some interesting stuff to KC. The local guys are too busy keeping their stuff boring so they can play at the Green Lady.

Oh come on. The KC jazz scene has always been conservative. It's not fair to knock players who just want to have a gig. And a nice gig at that. Modern jazz is a club killer.

Fighting over crumbs. Let's love on all improvisers. We need more flexibility of art AND opinion. Makes the world a better place. Green lady kids are fantastic and are building an audience (and the club is open while having improvisation!). The more daring artists (not necessarily more skilled or creative) too are wonderful. Time to realize the two are on the same team. Take it or leave it. I'm sure each of the groups would celebrate each other.

The Green Lady is a business, and good businesses offer good products that sell.

I've never claimed to be an "innovator", that's not who I am or aspire to be as a musician. But I have a great gig every week where large crowds are moved and excited by the music. People dance. People scream after soulful solos. People buy our records. Never once have I felt creatively inhibited.

Electric Tinks might be the best music in the world every time they play.

Well said Chris. You are one of my favorite of the many creative artists who have a regular gig at the Green Lady. I find the "I'm hipper than you" attitude on display by Anon 9:18 to be extremely tedious.