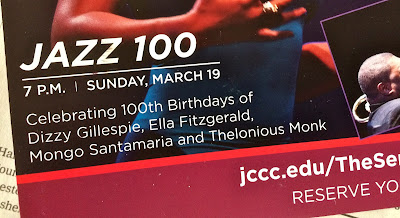 I entered Yardley Hall with a chip on my shoulder on Sunday.  The promotional campaign for the "Jazz 100" concert at Yardley Hall exasperated me.  Instead of highlighting the names of the participants, the front of a postcard mailing for the event read "celebrating 100th birthdays of Dizzy Gillespie, Ella Fitzgerald, Mongo Santamaria and Thelonious Monk.”  Other marketing efforts for the final event of the Jazz Winterlude festival also treated members of the all-star band as irrelevant afterthoughts.

I didn’t buy a $30 ticket to honor the dead.  Instead, I was eager to hear the vivacious work of the all-star band assembled by pianist Danilo Pérez.  Vocalist Lizz Wright, saxophonist Chris Potter, trumpeter Avishai Cohen, trombonist Wycliffe Gordon, bassist Ben Street, percussionist Roman Diaz and drummer Adam Cruz played as if they were eager to prove that vibrant jazz wasn’t exclusive to the previous century.

The extended duet between Perez and Cohen that opened the concert dispelled my concerns.  Rather than attempting to evoke Gillespie, Cohen played in the meditative style documented on his most recent album for the ECM label.  His bandmates were similarly unburdened by the format.  Wright sounded nothing like Fitzgerald when she applied her gorgeous voice to selections including the obscure civil rights song ”It’s Up To Me and You”.

Perez’s solo rendition of “‘Round Midnight” contained none of Monk’s idiosyncrasies.  Even if Diaz wanted to approach Santamaria faithfully during his turn in the spotlight, there was no way the band would have allowed it.  The only familiar arrangement of the 90-minute concert was assigned to “Well, You Needn’t”, but Potter’s extended solo pushed well beyond John Coltrane's exploration.

With the exceptions of Street and Cruz, each member of the band had at least one such opportunity to display their core strength.  Rather than clashing, consequently, the radically mismatched frontline of Potter, Cohen and Gordon provided engaging variety.  Anyone in the audience of more than 500 who had hoped to revisit the 1950s was almost certainly disappointed.  I walked out of Yardley Hall on cloud nine.

(Original image by Plastic Sax.)
Posted by Happy In Bag at 9:47 AM