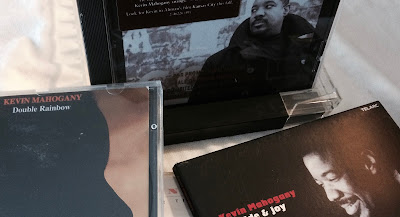 The nights I spent dancing to an R&B band led by Kevin Mahogany at Kansas City clubs like Jimmy’s Jigger in the 1980s were among the most carefree evenings of my life.  Mahogany’s sultry renditions of Al Green and Marvin Gaye hits were just part of the fun.  The magnanimous singer enjoyed befriending his admirers.  He and I bonded over our mutual admiration of the country star Randy Travis.

The sound of Mahogany’s 1993 debut album Double Rainbow came as a surprise.  R&B was supplanted by a straight-ahead jazz setting that highlighted his burnished voice.  He soon became the leading torchbearer of the male vocal tradition associated with Joe Williams, Jimmy Witherspoon and Johnny Hartman, a space currently occupied by Gregory Porter.  Like many people in Kansas City, I was proud that the hometown heroes Mahogany and Karrin Allyson had attained jazz stardom.

The independent label Enja issued Mahogany’s first four albums.  Warner Brothers released his fifth through eighth recordings.  Pride and Joy, a 2002 return to his R&B roots for the Telarc label, is Mahogany’s final notable statement.  Mahogany’s voice weakened considerably.  Label support and fan enthusiasm dissipated.  He displayed a fraction of his former capacities during a distressing appearance at the Kansas City Jazz & Heritage Festival in May.  Mahogany died last week.  He was 59.