Logan Richardson: The Plastic Sax Person of the Year 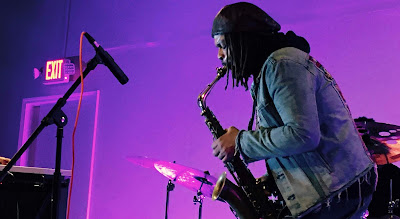 The most encouraging moment of 2019 on Kansas City’s jazz scene transpired at the Ship on September 11.  Several dozen people in their twenties and thirties were transfixed by a band led by Logan Richardson.  As the saxophonist, vibraphonist Peter Schlamb, bassist Dominique Sanders and drummer Ryan Lee locked in on a mesmerizing groove, the sort of rarified sound associated with the innovative jazz hubs of Chicago, Los Angeles and London made an all-too-uncommon appearance in Kansas City.  Long based in Europe, Richardson seemed to spend more time in his hometown in 2019.  He elevated the playing of his contemporaries in his public performances in Kansas City.  He also contributed to Christian Scott aTunde Adjuah’s Grammy nominated Ancestral Recall album and released the bold track “Her” on December 13.  Plastic Sax has documented Richardson’s ascent for more than ten years.  His designation as the Plastic Sax Person of the Year is overdue.

(Original image by Plastic Sax.)
Posted by Happy In Bag at 11:02 AM