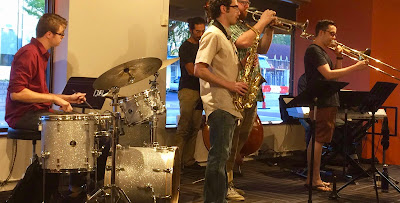 I began tracking the steady ascent of Brian Scarborough even before I snapped the embedded photo of the young Kansas City trombonist at Homer’s Coffee Shop in 2017.  I’ve impatiently anticipated the release of his debut album since catching an astounding performance by Scarborough’s band at recordBar last year.  Released August 7, Sunflower Song is worth the wait.

Not only does the uncommonly elegant album showcase Scarborough’s talents as a trombonist and bandleader, Sunflower Song is an essential document of the artful component of Kansas City’s jazz scene.  In recruiting four of Kansas City’s most notable musicians- tenor saxophonist Matt Otto, guitarist Adam Schlozman, bassist Jeff Harshbarger and drummer Brian Steever- Scarborough is responsible for giving the rest of the world an opportunity to hear the magnificent sounds a small cadre of locally based fans of improvised music have enjoyed in recent years.

Rather than dominating the nine tracks, Scarborough allows his bandmates equal footing.  The democratic collaboration pays homage to the cool West Coast jazz of the 1950s, an approach allowing Scarborough to honor the adventurous spirit of Bob Brookmeyer.  The late Kansas City native is Scarborough’s most obvious reference point.  The sound may be based on a venerable tradition, but there’s nothing stale about Sunflower Song.

Serene on the surface, the album is deceptively subversive.  Otto invokes the underappreciated Jimmy Giuffre while Schlozman’s thorny solos reveal the influence of Thelonious Monk.  The stutter-step rhythms of “City Lights” highlight the synchronicity between Harshbarger and Steever.  Scarborough exhibits none of the youthful aggression you’d expect to hear on the debut album of a rising star.

Immanuel Wilkins’ very fine Omega, the most prominent jazz album released August 7, is characterized by brash solos and innovative production tricks.  That’s clearly not Scarborough’s style.  Yet his reserved sensibility produced one of the most consequential acoustic jazz albums made entirely by Kansas City musicians in recent years.