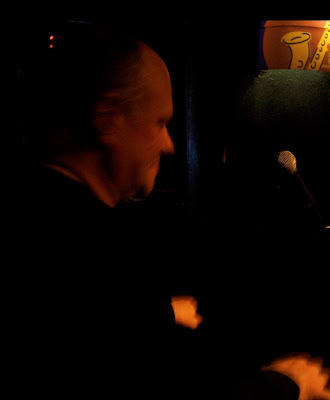 Is Tim Whitmer the most popular living jazz musician based in Kansas City? In terms of dates played, toes tapped and smiles inspired he wins the prize. He's been a mainstay for decades- he has thousands of gigs under his belt at the City Light, the Phoenix, Jardine's and various houses of worship. His site calls Whitmer "Kansas City's Entertainer of Choice." That's only fair. Whitmer may not be the hippest or edgiest musician in town, but he's clearly the face of Kansas City jazz to thousands of locals.

(Unflattering photo of the handsome pianist by Plastic Sax.)
Posted by Happy In Bag at 9:04 AM