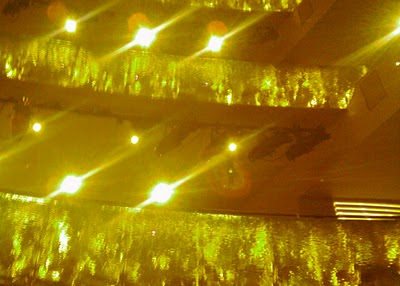 *The namesake of this site was aired out Saturday. The plastic sax once played by Charlie Parker was employed by Bobby Watson at the grand opening of the Kauffman Center. Robert Trussell reviewed the performance. A St. Louis-based critic also took note of the "plastic saxophone." The Grafton, by all accounts, sounded good.

*Another addition to Jay McShann's legacy is documented by KCJazzLark. Absolutely essential.

*Here's the lineup for the annual jazz recital series at JCCC. The first noontime concert features Charles Williams on September 27.

*The world premiere of Michael Pagan's "Reflections of Jazz Trilogy" takes place at The Changing Gallery at the American Jazz Museum on Friday, September 23, at 5 p.m. Pagan will perform with Bob Bowman, Ray Demarchi and Dave Chael.

*Doug Ramsey reviews a performance by Pat Metheny and Larry Grenadier. The duo appear at Liberty Hall on September 29.

*Tim Finn chats with Jeff Harshbarger about his role in Jacob Fred Jazz Odyssey. Friday's performance by the band is reviewed here.

*A blogger recounts her visits to Jardine's and the Blue Room.

*Even though it rehashes many points regularly made at Plastic Sax, I swear that I did not write this 'Dear John' Letter to Jazz. (Tip via Gary.)

*Separated at birth: Megan Birdsall and Jessica, the redheaded vampire on True Blood.

*Today's Groupon is a two-for-one deal on the Rhythm & Ribs festival.

*From a press release: Although 1911 Restaurant & Lounge (1911 Main) opened in July this year, they will hold a Grand Opening on the weekend of Friday, September 30 and Saturday, October 1 from 6:00 p.m. until 12:00 a.m. The Grand Opening of this restaurant and jazz venue will be celebrated with performances by David Basse and the Everette DeVan Trio on Friday and Bob Bowman & Bowdog on Saturday... Saturday at midnight will be the first of a four month run by the live radio broadcast of 12th Street Jump, Public Radio’s Weekly Jazz, Blues, and Comedy Jam.

*From a press release: The Swope Corridor Renaissance/Upper Room’s Eddie Baker School of Music will present Music Matters to benefit the children of its Music Program. The musical event will be at 8:00 p.m. on Friday, October 14, at the Church of the Resurrection, 13720 Roe, Leawood, Kansas 66224. Featured performers of Music Matters are Bobby Watson, world renowned saxophonist/educator; Lonnie McFadden, celebrated artist from the Wayne Newton Vegas Review; Marilyn Maye, the most featured singer on the Tonight Show; and Pamela Baskin-Watson, New York singer/songwriter. Other performers are the Palestine Gospel Singers, The Elder Statesmen of Kansas City Jazz, and the children and staff from the Upper Room’s Music Program.

Hey Bill - thanks for the tip. I went to Take 5 last night to hear Danny Embrey, Bob Bowman and a really good young drummer, Philip Wakefield. Great. A nice place and no cover! It would be nice to see more people show up and support this place. I saw that Roger Wilder and Stan Kessler are playing there on Saturday - 'cmon JoCo jazz fans what are you waiting for?