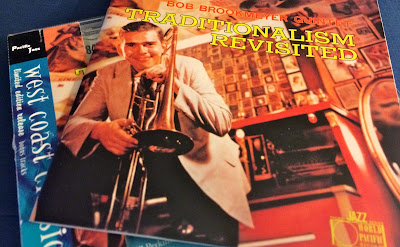 I’ve been obsessed with Bob Brookmeyer’s Traditionalism Revisited since I purchased the CD at an estate sale for $1 in September.  The premise- a set of forward-thinking jazz musicians revisit the supposedly passé music of earlier decades- is made even more fascinating by the passage of time.  The music still sparkles 58 years after the 1957 session.

I felt as if I was listening to an updated version of Traditionalism Revisited at the Westport CoffeeHouse on Wednesday as the young trombonist Brian Scarborough led a band consisting of saxophonist Rich Wheeler, guitarist Danny Embrey, bassist Jeff Harshbarger and drummer Brandon Draper.

The willingness of four of the region’s elite musicians to back Scarborough reflects his substantial talent and enormous promise.  Like Brookmeyer, Scarborough is a scholarly trombonist with deep ties to Kansas City.

Just as Brookmeyer’s reverent approach to traditional jazz was invigorated by the work of cutting-edge musicians like Jimmy Giuffre on Traditionalism Revisited, Scarborough was provoked by the progressive playing of his more experienced colleagues on Wednesday.  The delectable tension between old and new impulses made the first half of Wednesday’s concert captivating.  A reading of Duke Ellington’s “The Petal of a Rose” was one of the most beautiful things I’ve heard in 2015, but the entire first set for an audience of two dozen was profound.

In his liner notes for Traditionalism Revisited, Nat Hentoff suggested that Brookmeyer wasn’t just another commonplace “parochial hipster.”  Neither is Scarborough.  The trombonist leads a similar band at Westport CoffeeHouse on Wednesday, January 20.