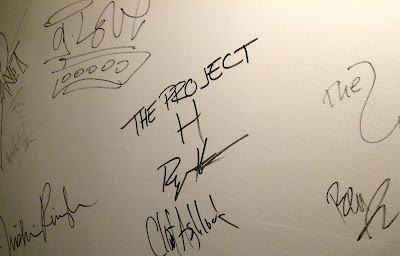 *The Kansas City Star reports that EBT restaurant will close at the end of the month.  The establishment's lounge has long featured performances by many of Kansas City's most prominent jazz musicians.

*Bryan Hicks was the subject of a 50-minute interview on KCUR’s Central Standard program.

*Julian Vaughn promoted his concert at the Gem Theater on a morning television program.  The Pitch recommends the show.

*Karrin Allyson was nominated for a Grammy Award in the category of Best Jazz Vocal Album for Many A New Day: Karrin Allyson Sings Rodgers & Hammerstein.

(Original image of an autographed studio wall at 90.9 The Bridge by Plastic Sax.)
Posted by Happy In Bag at 10:35 AM

Congratulations to Tim Whitmer. His concert series Spirituality and all that Jazz has run the first Wednesday of the month since 1994. Several hundred people attend every month. The audience may be dying off but numbers have remained consistent for 21 plus years. His Jazz Carol Fest and July Jazz Jam concert productions are consistently well attended and feature many musicians.