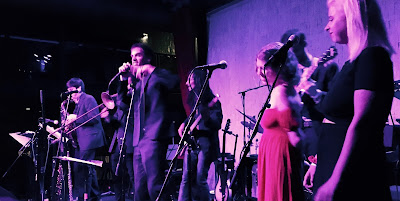 *KCUR aired an audio feature about Robert Castillo and the Sextet.  The Sextet also performed on The Star Sessions.

*Eddie Moore made an appearance on the weekly Thursdays with Timothy Finn radio show.

*Pat Metheny’s relationship with the Montreal International Jazz Festival is considered by NPR’s Jazz Night in America.  A cranky Australian journalist gets the scoop on Metheny’s next album.

(Original image of the Sextet’s album release show at RecordBar by Plastic Sax.)
Posted by Happy In Bag at 9:30 AM