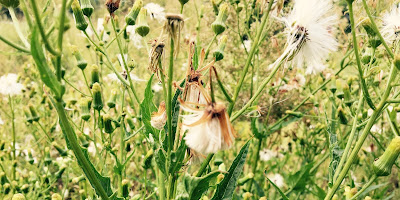 *Jackie Myers pitched her new album in an interview with Joe Dimino.

*Bird at 100, an album featuring Bobby Watson, Vincent Herring and Gary Bartz, will be released by Smoke Sessions Records on November 29.

*A performance by the Boulevard Big Band is documented by Joe Dimino.

*From the American Jazz Museum: In celebration of John Coltrane's September 23rd birthday, AJM is proud to present a new exhibition, on display through the end of October, 2019… Featured objects in the exhibit include a letter written by Coltrane to Congressman John Conyers, and a telegram sent by Floyd B. McKissick, the National Director of CORE (Congress Of Racial Equality) to Naima Coltrane after the artist's death on July 17th, 1967.

(Original image by Plastic Sax.)
Posted by Happy In Bag at 8:50 AM