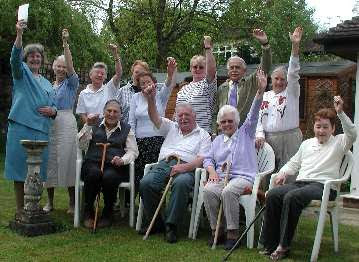 Meet Kansas City's most enthusiastic jazz supporters. (I'm fourth from the left.) As I told The Pitch a few months ago, I'm tired of being one of the youngest people in the room when I attend live jazz events. And my hair turns grayer by the day.

These are desperate times for jazz. Acclaimed new releases by Ornette Coleman and Sonny Rollins struggle to sell 10,000 units. In Kansas City, The Phoenix jazz club is shuttered, hopefully only temporarily.

Will any jazz enthusiasts remain twenty years from today? 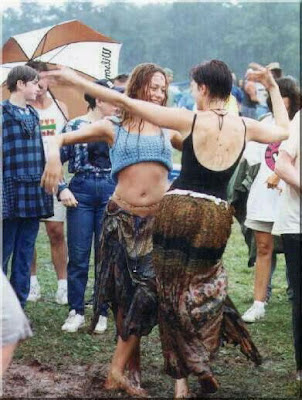 Hippies may be jazz's last hope. They dig improvisation and appreciate a groove. Every decent jam band counts John Coltrane among its influences. Back in May, I attended one of two sold-out shows at the Uptown Theater by jazz-inflected act Widespread Panic. A week or two later, I caught jazz-funk band The Greyboy Allstars at Crossroads. Who was there? Me and 500 hippies.

Ken Lovern knows this. The area jazz organist plays Friday night at Davey's Uptown as part of the "Jerry Garcia Memorial Stomp." That's a good gig, the type that's needed if the music is to forestall its date with a bottle of formaldehyde.

(Lovern gig tip via The New Low Down; photos borrowed without permission from web.)
Posted by Happy In Bag at 1:04 PM

I just found this site. Great stuff. Thanks for providing this resource.

If the audience for jazz is shrinking, it's because vast, sweeping majorities of the general public simply don't know how to listen to it.

Modern jazz is nowhere near as accessible as modern pop music. In order to "get" jazz, to obtain pleasure from listening to it, one needs to know something about music and come at it at least partly from a musician's perspective. Interaction between the players and the song itself is an alien concept to most contemporary Americans. No wonder they don't understand.

I love swing jazz, and via my understanding of it, I'm starting to get the beginnings of an inkling of what the post-bop/free jazz/etc stuff that rules the radio these days is about. But it's serious work listening to it. It's work moving it from background noise to the focus of my attention. It's work trying to grasp why this is music and not just random notes being hammered out for 14 minutes. It's work trying to figure out why such rhythmic music is so eminently, intentionally undanceable. If you haven't grown up around modern jazz—and most people these days haven't—it's work simply trying to come to grips with what's going on, and, not surprisingly, few want to do that when out listening to music in a club. They want an easy "in", followed by deeper complexity once they're hooked. Modern jazz offers plenty of the latter, but zero of the former.

New listeners need something they can relate to; they need to be entertained first and foremost. Maybe they need a dance beat, as swing had, or as some jazz/electronica fusion has now, or maybe they need witty lyrics—I don't know. But one thing is clear: a bunch of dudes simultaneously improvising around no structure or apparent key has and will always have a very limited appeal.

Thanks for the thoughtful commentary, Derek. It just so happens that DJ Logic appears in Kansas City tonight. He represents, for better or worse, the direction you suggest in your final paragraph.

Wow, I'm flattered to have made it out of the comments section and onto your Home page. Cool!

Thanks for the link to DJ Logic. Unfortunately I saw your reply after the fact. I see the whole DJ/club culture side of music as being first in line to fuse with jazz. I know there have been some good CDs (IMO, see for example http://www.koop-islands.com) to come out of this idea, but it hasn't taken off the way I would hope or expect.

At the risk of sounding snobby, compared to pop, I think most jazz is probably too complex or sophisticated, too much of an "acquired taste" to really compete in number of listeners. But that's not a bad thing. In fact, I personally prefer being part of a healthy, vibrant minority. More than sheer numbers of fans, I think the important thing is maintaining that health and vibrancy.

Of course, number of fans helps in that regard, but the KC scene appears to be doing just fine. All the shows I've attended lately have had fine audiences, and many were packed. I disagree completely about the age of the fans in KC. My experience is that the audience spans the ages and classes, which is one of the things I like about it! And The Foundation crowd on Saturday was mostly 20-somethings even well BEFORE 3:00, when it becomes the only place in town to get booze. And half the musicians themselves looked under 30. The 12 O'Clock Jump is very very…COOL, and they have no problem filling the space. Not bad, wouldn't you say?

By the way, I loved your 10 best KC jazz albums. Thanks for putting me onto the City Light Orchestra!