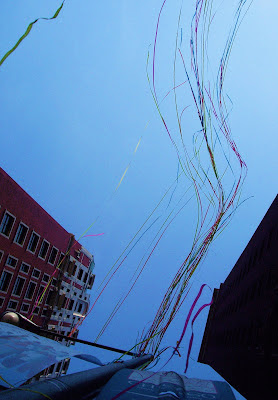 *The more I ponder Ed Fenner's passing, the more concerned I become for Kansas City's traditional jazz establishment. Fenner had been carrying a disproportionate amount of the workload on his back. Might this be the end of an era? Each of the comments to my previous post is thoughtful, but take special note of Carrie Brockman's bulletin that Jardine's is hosting a memorial jam this Sunday. And don't miss Present magazine's tribute to Fenner.

*The full schedule for June's Rhythm & Ribs festival has been set.

*Bobby Watson is performing next month at the Glasgow International Jazz Festival.

*The Unthinking Lemming continues to step up.

(Original image by Plastic Sax.)
Posted by Happy In Bag at 9:08 AM

"*The Unthinking Lemming continues to step up"

I'm no Ed Fenner. But I'll do what I can to partially fill the void he has left.

Help me, Plastic Sax. What's gonna be good at Rhythm & Ribs this year?

That's sad about Ed. I met him only once, but he was quite friendly and definitely a servant of jazz.

I might turn your question into a proper post, Harper. For now, though, here are the acts I'm most excited about, in order:

Thanks for the tips on R&R. It would probably be good for me to see my fellow Texan Ornette Coleman at least once before he departs this mortal coil.