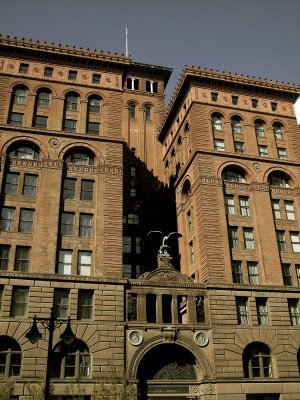 (Original image by Plastic Sax.)
Posted by Happy In Bag at 8:27 AM

i differ with you in gambarini. i just reviewed 8 sets my ms. gambarini at yoshi's in oakland, ca. she
is one of the greatest musicians alive today. www.wenjaz.blogspot.com

I appreciate the input, Wen Mew. I'd love to be wrong about RG. Thanks for checking in.

Isn't the photo The New York Life Building and not The Folly?

I realized I've never grabbed an exterior shot of the Folly, BGO, and figured this downtown building is even more dramatic.

It is sad that it looks like the NY Life Building will be empty soon. Since Aquila was sold the new owners for whatever reason are moving out.

Part of the perks at working at the library was we could eat at the cafe they had in the basement of the NY Life Building. For $4.00you could get an entree with 2 sides and some bread. Iced tea was free with lemon or lime to add flavor. I'll miss it.

It IS the most dramatic building in downtown KC and every effort should be made to save it.

The Folly would not be my first choice of venue to see Scofield. Spoiled by Medeski, Martin and Wood appearances at Liberty Hall, I'd rather catch him out there.

I absolutely love the Folly. But dance-oriented shows don't work so well there- how will people dance at the Los Lobos show in October?