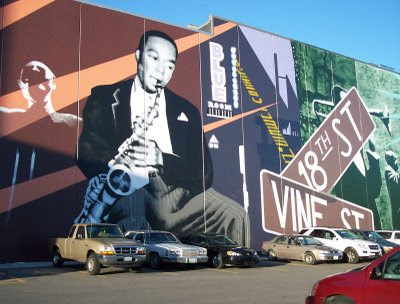 I just got off the phone with Bob Kendrick, director of marketing at the Negro Leagues Baseball Museum.

I had called to inquire about the status of True To the Game, an album benefiting the museum. It features hip hop superstars Kanye West, T-Pain, Akon and Yung Joc.

The album was scheduled for release today, but I hadn't been able to find it. Kendrick told me that the record label and distributor decided to push the album back to February to coincide with Black History Month.

That got me to thinking about one of my pet ideas- an album benefiting the American Jazz Museum.

They could work with original recordings of Kansas City jazz legends. Even better, perhaps, Bobby Watson and his UMKC students could provide individually tracked cover versions of the classic sounds for the hip hop guys to manipulate.

Ideally, the local stars could pull in a few name ringers from outside Kansas City to give the project additional sales potential.

(Original image by Plastic Sax.)
Posted by Happy In Bag at 11:09 AM

If only Kansas Citians were more proud of KC.

As you know there is serious self loathing going on.

ps- the pic you used is a perfect example. Somehow the city thought it was a good idea to pay an outside agency to create our downtown culture for us. Does this mean we were not capable of coming together and doing it in a genuine way ourselves? Do they care about authentically representing Kansas City?

Case in point, Bodies Revealed, claiming to be legit (as documented on KCPT), only admits it is morally corrupt upon the tail end of the end of their visit to our fine gullible metropolitan area.

Ok, I'll stop. What's up with a Plastic Sax conference? Someone needs to pull creative area people together in a real way.