Discovering the Heart(s) of Darkness 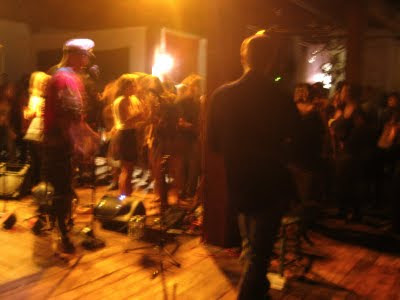 Members of the horn section engage in fiery battles. Controlled substances are openly consumed as dozens of dancers- most of them in their twenties- gyrate wildly to the 17-piece big band. A charismatic front man leads the charge like a modern day Cab Calloway. It's a raucous scene straight out of Pendergast-era Kansas City.

Yet the most exciting big band in Kansas City isn't exactly a jazz act. The Hearts of Darkness play Afrobeat. Rather than attempting to recreate jazz charts, the loose grooves associated with Fela serve as the ensemble's point of departure. This rather antiseptic video barely begins to reflect the celebratory atmosphere of a typical show.

Far from a musty academic exercise, the Hearts of Darkness convey the spirit, if not the sound, of Kansas City's heyday. The Hearts of Darkness deserve recognition from the jazz audience because their visceral big band power is the soundtrack to the same exuberant scenes that undoubtedly accompanied the bands of Benny Moten, Harlan Leonard and Count Basie.

(Original image by Plastic Sax.)
Posted by Happy In Bag at 10:56 AM

This band has always intrigued me and I love afrobeat, but the hippie dance party vibe keeps me from ever seeing them live. I feel like I would just spend the whole show rolling my eyes at people in the crowd.

It's more hipster than hippie, DLC. You should give it a whirl.

Dont like this band, too many people not enough quality music.