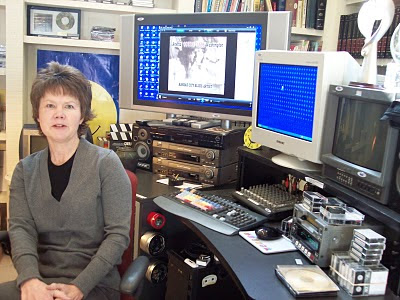 Who is Sue Vicory and what is her deal?

I've been eager to find answers to those questions since I became aware that Vicory was interviewing jazz musicians and filming their performances.

Kansas City Jazz & Blues: Past, Present & Future, Vicory's documentary about Kansas City's jazz and blues scene, is almost complete. Marilyn Maye will be among the artists performing at the film's May 6 premiere at the Gem Theater. Tickets are available at Ticketmaster.

I conducted the following email interview with Vicory prior to spending an hour with her at her home. I discovered that Vicory is an exceedingly kind person with absolutely no ulterior motives. She simply wanted to document the scene and is financing the film out of her own pocket.

I share Vicory's belief that she's doing important work. I don't think she agreed with me, however, when I suggested that scholars in Japan fifty years from now might find her film of more value than will most of Kansas City's current populace.


Plastic Sax: How did you manage to condense so much footage into one hour?

Sue Vicory: Ask my editor. It's not easy.

PS: Why did you limit the film to an hour?

SV: Because that was all I could afford!

PS: Where do you hope the film is shown after its premiere?

SV: In the schools, film festivals, all over the world.

PS: Public television? Art houses? Will it eventually be available on DVD?

PS: It seems like you've been working on this project for a long time. When did you begin?

PS: What inspired you to make this project?

SV: I was asked by a friend to become involved in a new arts organization. The only thing I had to offer was the possibility of making a film. Once the filming got started it created a life of its own. There was no way to stop until the story was told. The arts organization did not survive but it gave birth to this film so that pretty amazing.

PS: What's your background as a filmmaker?

SV: Film school in NYC. Editing school in DC. I am an Avid editor. My first film was called Homelessness and The Power of One. It premiered in 2005 two weeks after Katrina hit New Orleans. The film has raised over $200,000 for shelters. It most recently screened for Steve Lopez (The Soloist) when he was in town. It took me three years to make the film. I am also on the Board of Directors for Kansas City Women in Film and TV.

PS: How is the film being funded?

SV: Heartland Films, Inc. is my not for profit production company. I finance my own films.

PS: Did I read that Marilyn Maye is going to be part of the festivities at the premiere? How did that come about?

SV: Yes. I called her! We did her interview recently at UMKC White Hall. She was lovely.

PS: Who was the most interesting interview subject?

SV: David Basse with his hat. Also Jo Burke was a hoot.

PS: The most difficult?

SV: The difficult ones were the musicians I asked for interviews consistently who didn't oblige.

PS: Who were you most excited to meet?

PS: Why did you decide to feature both jazz and blues in your film?

SV: Because blues and jazz are our true Kansas City musical roots.

PS: Please compare and contrast the blues and jazz scenes in Kansas City.

SV: I would say they are equally active with equal amounts of dedicated fans.

SV: R&B. I'm a Motown girl. Bloodstone wrote the music for my first film and we screened the film in Detroit at a Motown concert.

PS: Which of the artists in the film do you most often listen to for pleasure?

SV: I have all their CD's. I'm pretty inspired by what Hermon Mehari is doing. I knew when I interviewed him that he had the makings of something great.

SV: Michael Jackson's This Is It.

PS: Have you spent much time studying The Last of the Blue Devils?

SV: No, I barely watched it once.

PS: The film's subtitle is "Past, Present & Future." How does the present scene compare to that of the past?

PS: And what's your outlook on the future of jazz and blues in Kansas City?

SV: It is here to stay! Our musicians are extremely talented. With folks like Leon Brady and Bobby Watson teaching the next generation of musicians, the legacy will live on.

PS: What response do you hope to elicit from viewers?

SV: That they fall in love with our Kansas City musicians such as I have! I have lived in Kansas City for 25 years and had been to 18th & Vine once prior to making this film. I had never even heard of the Mutual Musicians Foundation. I attended my first late night jam there when Richie Cole was in town. The experience forever changed how I view our musical heritage here in Kansas City.

(Original image of Vicory in her home studio by Plastic Sax.)
Posted by Happy In Bag at 1:31 PM