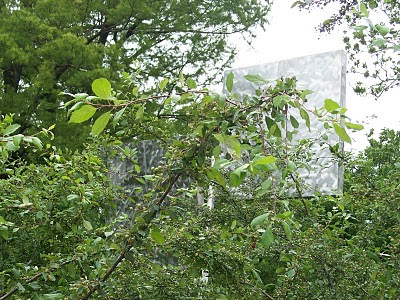 *KCJazzLark tells the story behind a historic facade in the Jazz District.

*The 2010-11 season of the Kansas City Jazz Orchestra has been announced.

*A visit to the American Jazz Museum rates on JazzTimes' jazz bucket list. (Tip via AZ.)

*The Pitch chats with Mark Lowrey.

*A blogger is mystified by fresh digging at the Charlie Parker grave site. I provided my best guess in his comment section but I suspect I'm wrong.

*Barbara Thomas of the American Jazz Museum is interviewed by the local NBC affiliate.

*KMBZ covered the "piano-thon" at the Mutual Musicians Foundation.

*The latest album from Michael Pagan's trio is characterized as an "exceedingly pleasant release" by a California publication.

*Mike Metheny created an atmospheric video for a track from his new album. He chats about Miles Davis in this podcast. "It was great music to make out to," Metheny says of Kind of Blue. All of Metheny's commentary is fascinating.

*A blogger reports on his first visit to the American Jazz Museum.

*Here's a fan video of Orrin Evans' recent appearance at the Blue Room.

*"If Charlie Parker seems a less filthy racket today than he did in 1950 it is only because... much filthier rackets succeeded him." The Independent examines poet Phillip Larkin's difficult relationship with jazz.

*The following notice about a July 25 appearance by Pearl Thuston-Brown was posted at the Facebook account of GiGi's on Troost: Kansas City's Own Legendary Jazz Pianist, Vocalist, and Song Stylist invites YOU to celebrate another fabulous birthday. Come dressed in roaring 20's attire and be transported to the GOLDEN AGE of Jazz and American Song.

(Original image by Plastic Sax.)
Posted by Happy In Bag at 2:52 PM