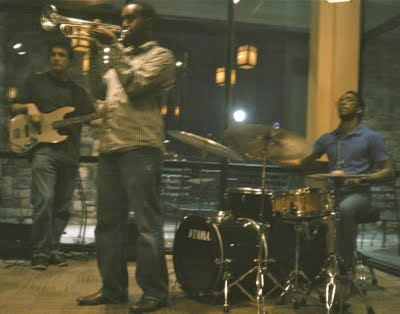 *Pat Metheny and Larry Grenadier will perform at Liberty Hall in Lawrence, Kansas, on September 29.

*Hermon Mehari is the subject of a video feature.

*Karrin Allyson reveals her Luddite tendencies to a journalist in Pennsylvania.

*The New Jazz Order Big Band and Blueprint will perform at KJHK's Jazz in the Park on May 8. (Via KJHK's KC Jazz Connection.)

*KCJazzLark continues to recollect his experiences with the Kansas City Jazz Commission.

*Marilyn Maye will appear at a benefit concert May 1 at Rockhurst High School.

*Mark Southerland teams up with the Jacob Fred Jazz Odyssey this weekend for the opening of Jazz Fest in New Orleans.

*Gary Foster will appear on Steve Kraske's Up To Date Friday, April 29, on KCUR.

*From Crosstown Station's calendar: Kansas City's best horn player Hermon Mehari is uniting the best of Kansas City's finest Jazz musicians to pay tribute to the great Miles Davis on his Birthday. Guest musicians include Brad Williams (drums), Andy McGhie (tenor saxophone), Andrew Ouellette (piano) Dominique Sanders (bass)... Get ticket now as this will be a sold out show. The show is May 26.

(Original grainy image of Ben Leifer, Hermon Mehari and Ryan Lee performing at Take Five Coffee Bar on April 23 by Plastic Sax.)
Posted by Happy In Bag at 9:48 AM

For the love of god we've got to stop with the Radiohead and Bjork.

Yeah, let's get back to yet another rendition of "Autumn Leaves". That's exactly what we need!

For the love of god, we've got to stop listening to the self-appointed jazz curators.

At this rate Radiohead and Bjork are going to be as tired as "Autumn Leaves" if everyone keeps doing it.

For the love of god, somebody write some music.

For the love of God, someone please start a decent jazz blog in KC. I kid, I kid...