Getting Lucky with Rob Scheps 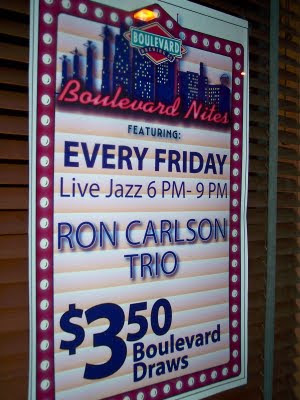 Although I'm accustomed to crazy talk, I did a double take when a friend told me that Rob Scheps (warning- buggy site) was the best saxophonist she'd ever heard. That this plaudit was shared at the intermission of Joe Lovano's recent concert at the Folly Theater made it all the more incredible. Even so, I took notice when Lovano warmly greeted Scheps from the stage that night.

I headed to Ron Carlson's weekly gig at Lucky Brewgrille in Mission last Friday to catch Scheps sitting in with the band. Although the setting was far from ideal, I was able to hear enough to know that my friend isn't entirely nuts. Scheps' burly tenor saxophone reminded me of the approach employed by Scott Hamilton.

The entire gig, in fact, resembled a refined '80s-era session for Concord Records. It looked and sounded a bit like this Scheps-free footage. I also realize that Scheps isn't limited to mainstream sounds. He plays in an entirely different format here.

About two dozen people paid attention to Carlson's band. The remainder of the popular restaurant's patrons chatted noisily as they watched a Royals game on television. I applaud Lucky Brewgrille for its commitment to live jazz and for having the decency to play recorded jazz during the band's break. Even so, it's a compromised situation for serious musicians.

The Cobb salad at Lucky Brewgrille, incidentally, is quite good and the service is excellent. Carlson features Stan Kessler on Friday, April 22. With any luck, I'll be there.

I totally agree. Rob Scheps is a natural musician. A prodigy (even though that designation and term is admittedly bandied about and applied all too often). He says that he doesn't even practice, yet has total command of the instrument from what I have heard every time I catch him somewhere. Sort of like Bobby Watson... but, to further qualify, I do believe that Bobby has a practice routine of advanced concepts that he employs and is always working new stuff out.

I work near Lucky Brewgrille. They had Kip Winger play a year or two ago (Beavis and Butthead joke anyone?). We certainly don't need more bars/restaurants with TVs. Every restaurant in JoCo is adding TVs. Some of us just prefer to hear the music or converse: *sigh...*

Your comments, Cb, validate what I heard Friday and the opinion of my friend. Thanks.

I don't get it either, Gary. Even the two best music rooms in Westport leave televisions on as musicians perform.

The annual gigs with Roger Wilder and Rob Scheps are a "can't miss" KC jazz event. This year at the Blue Room was no exception... Greg Gisbert (trumpet) was an outstanding add. Big props to Roger and Rob for bringing it every time!