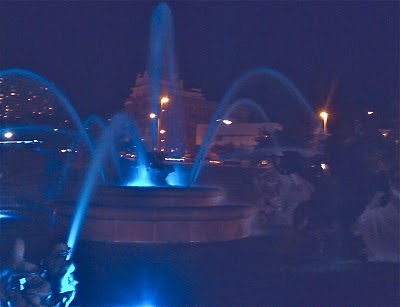 *Joe Klopus bemoans the tendency of area jazz programmers to repeatedly book the same artists. His disappointment is merited, but I'm not going to complain about the opportunity to catch Joe Lovano and Christian McBride more than once every twelve months.
*Could this be the best week of the year for Kansas City's jazz fans? Our locally-based talent is, of course, always outstanding. Tonight's options include Megan Birdsall, Shay Estes with Mark Lowrey, Michael Pagan and Lonnie McFadden. Additionally, Jardine's hosted Todd Clouser on Sunday. The Blue Room hosted a compelling jazz talk last night. The UMKC Conservatory's bands are showcased tonight at Helzberg Hall. Garage a Trois and Pat Metheny perform in the area Thursday. Ambrose Akinmusire is at Yardley Hall on Friday. Saturday's options include Wynton Marsalis with the Jazz at Lincoln Center Orchestra and the Yellowjackets.
*Calvin Wilson interviews Wynton Marsalis for the Post-Dispatch. Marsalis leads the Jazz at Lincoln Center Orchestra at Helzberg Hall on Saturday. (Via St. Louis Jazz Notes.)

*Black House Improvisors' Collective has announced the participants in its new season.

*Hermon Mehari talks about a weekly gig at YJ's.

*Disastrous technical problems erased the initial draft of this post. Any omissions are purely unintentional. Musicians and publicists are encouraged to resubmit any material that they expected to appear in this space.

*From the Facebook posting for The People's Liberation Big Band's October 2 show at The Record Bar: We missed you, Record Bar! Last month we tried to take our radical jazz agenda to Prairie Village KS, but the gods weren't having it. The clouds have now parted and we are BACK! Be sure to hang around for the second set, in which we'll be joined by chanteuse/deluge-conjurer Shay Estes.

(Original image by Plastic Sax.)
Posted by Happy In Bag at 2:53 PM

Thanks for the link...