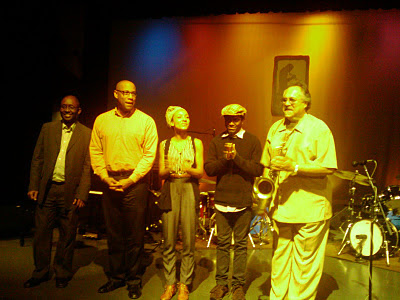 *The Leavenworth Times offers a nice preview of the Live at the Hollywood concert series.

*The Star and KC Metropolis reviewed Friday's concert at the Gem Theater by Joe Lovano and Us 5.

*The headline tells the story: Plastic saxophone definitely not a toy.

*A blogger comments on the An Evening with Virgil T. concert at Helzberg Hall

*Bobby Watson is characterized as "an old friend of Cork" in a preview of an Irish jazz festival.

*Tweet o' the Week: JazzWinterlude: Did you know: JCCC has a new Jazz Combo that will be playing at this year's #jazzwinterlude. #markyourcalendars

*From the American Jazz Museum: PEER Ambassador Celebration Tuesday, November 15th from 6:00-7:00 PM… This is an event to energize and inform all of our new Ambassadors spreading the word about the Museum... Do you know someone who enjoys the AJM, who would like to know more or is interested in becoming involved? Invite them to join us for a great evening at the Museum. Enjoy appetizers, meet other Ambassador and donors and learn how you can spread the word about the amazing work the Museum is doing. Please RSVP….

*(Extremely rare post-publishing edit)- From Peter Lawless/The Fishtank: For those of you familiar with Sir Threadius Mongus, Jeff Davis' jazz-tinged group, The Night's Bright Lights is another of his progressive musical groups which are providing the soundtrack to The Unwind, a large-scale work Davis has been creating for the last fifteen years. The NBL provides a new musical sound, with the use of mantra-like phrases, big beats & wall's of guitar, by way of an analog loop station, reminiscent of classic album-rock guitar indulgence, with an otherworldly-world music vibe. Featuring: Jeff Davis, Mike Stover, Matt Leifer. Tickets are $10.

Thanks for the late inclusion!

Lots of great stuff happening in the KC metro! Cb