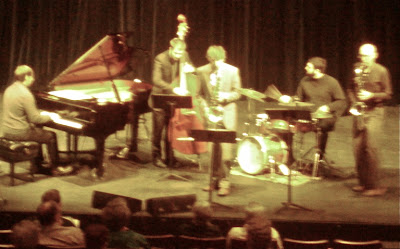 A musician I know suggests that the jazz audience is diminished because Americans have become undereducated and overstimulated. As he bemoans the dumbing down of our citizenry, I don't dare tell my friend that I like "Mr. Carter" as least as much as James Carter.

I may not entirely agree with the musician, but his assertion isn't without merit. In today's often unenlightened environment, no venture may be more quixotic than a collective dedicated to the music of Lennie Tristano. Defiantly counterintuitive, Crosscurrent is one of of Kansas City's most unlikely bands. A free October 19 concert at Polsky Theatre at Johnson Country Community College served as a reminder that Crosscurrent also one of the best groups in the region.

"I call it weird bop," bandleader Sam Wisman explained to an audience of about 150.

I call it cerebral music played to perfection.

Tracking Tristano's time signatures and deciphering a pair of Matt Otto's original compositions taxed my atrophied brain. Concentrating on a Crosscurrent performance is akin to winding one's way through a meditation maze. At the conclusion of Wednesday's labyrinth-like concert, I was almost too exhausted to check my cellphone to get the latest update on Kim Kardashian.

Crosscurrent is a great collection of young KC musicians. I hope they continue to add more of Matt Otto's original compositions and maybe some covers outside of the Tristano book.

Have they done any recordings?!

Even in a positive review of one of KC's most talent-rich acts, we first must read a paragraph about how no one likes jazz. I propose a monthly "What doesn't suck about Kansas City jazz" post, Happy. Sincerely appreciate and applaud your objective insights and all the publicity and exposure you bring to the scene (and on a volunteer basis!), but boy--it sure gets grim around here sometimes.

Your criticism is legitimate, Michael. But it's like this- I heard three of my favorite Kansas City jazz musicians at a club the other night. Their performance was stunning. Less than ten paying customers walked through the door during the two-and-a-half hours I was there. I refuse to pretend that everything is hunky dory. Kansas City's jazz scene is experiencing an artistic renaissance. And almost no one is listening.

Kansas citians are fiercely loyal to their music, their sound and their personalities.

Crosscurrent is a killing group but they could be in LA, New York, San Fran or Portland.

Look , the bottom line is that
in this economic time, night club jazz is for tourists, people on expense accounts and or people not managing their finances.

It may be that simple.

Interesting observation, but it should be noted that Cafe Augusta ($$), KCJO, and Tim Whitmer's monthly show aren't free and are doing well. Maybe some KC jazz fans are tiring of the wallet drain that one of our main jazz clubs has become. I have no problem with a cover charge, but then to pay $6 for a Boulevard draw??? 'Cmon!

Marketing of most jazz in Kansas City is done from the perspective of a relatively narrow focus and it seems that not much is taken into consideration where demographics are concerned. Let's buy a bunch ads in the typical publications that haven't produced a ROI because that is what we always do? Wrong. We have to begin developing diverse core audiences at all venues, rather than every group, club and organization promoting to the same patrons and sponsors. To program 4 sets like this is the 1950s will lead to the death of live music. I think that the artist scene is "getting" this better than the people booking venues and clubs because artists are creating more places to present and perform outside of the established "club scene". Economy, economy, economy? People are out doing lots of things and spending money on entertainment. So, it's not that big of a factor because attending live jazz in KC is actually not very expensive. We have to do lots of rebranding in the jazz world by making people besides musicians a part of the scene or face death. Pretty simple. We have to get organized! Cb