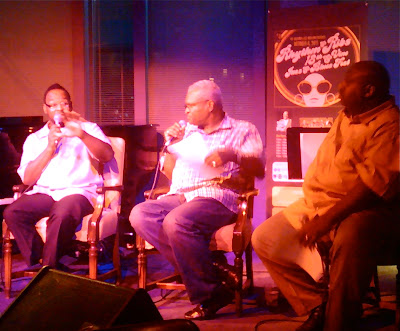 I prefer to listen to music in the dark lest people witness my visceral reaction to sound. Bobby Watson didn't enjoy that luxury last Tuesday at the Blue Room during the "Rhythm & Ribs Festival 'Blues, Bop & Nothing but the Funk' Listening Party" hosted by the American Jazz Museum.

About thirty people watched panelists Dennis Winslett, Watson and James Ward discuss music and music history in an effort to promote the October 8 event featuring War, Bobby "Blue" Bland and Christian McBride. When selections by James Brown were played, Watson so deeply immersed himself in the listening experience that I was compelled to avert my eyes. His unselfconscious and intimate responses made me feel as if I was intruding on a private moment. I get it.

Inspired by the music, the corresponding conversation was stimulating. When Winslett lauded the fusion of hip hop and jazz on Maurice Brown's "Time Tick Tock", Watson insisted that it be followed by Eddie Harris' funky "Freedom Jazz Dance." "Ain't nothing new!" Watson exclaimed upon hearing Brown.

Also noteworthy: Watson dismissed the word "jazz." He suggested that the genre would be better served if it was called folk music. And Glenn North recited his "Prodigal Poem" as Watson artfully comped on a piano.

Good times. I wish I could attend a similar event at least once a month.

(Original image of Dennis Winslett, Bobby Watson and James Ward by Plastic Sax.)
Posted by Happy In Bag at 12:14 PM