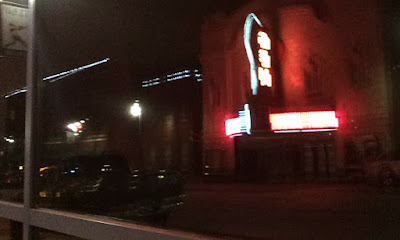 *Comment o’ the Week: Anonymous- Say what??? Checking the calendar, I see that the Roger Wilder quartet was at the Blue Room last Thursday. I've never been less that thoroughly impressed with any group that Roger is leading. He's so hip, it ought to be against the law! Your dismissive review of his quartet's performance makes me question whether I want to continue reading this blog.

*From a press release: The Birth of the Cool was released in mid-February 1957 as a compilation LP by Capitol Records. the selections come from recordings made by Miles Davis, Max Roach, Gerry Mulligan, Lee Konitz and others in 1949-50. While these tracks had been previously issued as 78 rpm singles, the LP release gave a name to a movement of young musicians who were playing this new "cool" style of bebop… The band for this presentation at the American Jazz Museum includes:Hermon Mehari - trumpet, Marcus Lewis - trombone, Forest Stewart - horn, Bill McKemy - tuba, Dan Thomas - alto sax, Todd Wilkinson - bari sax, Phil Dunlap - piano, Jeff Harshbarger - bass, Todd Strait - drums. Pianist Phil Dunlap will give a short talk on the history of Birth of the Cool during the program. Feb. 16, Gem Theater. Tickets $5 student/$10 general admission. Reception at 6:00 p.m., performance at 6:30.

(Original image by Plastic Sax.)
Posted by Happy In Bag at 9:26 AM

Thanks for the heads up about "The Birth of Cool." I just bought a ticket, and it'll be my first time at The Gem. I wish that it was on a weekend night, but it sounds good enough for the drive from Topeka.

Thanks for your coverage. You do a great job of giving everyone doing works on the KC scene some light. As an artist and professional in the business, what you do is cool to see because it is more like journalism. Rather than serving as a promotional platform with an agenda to simply market the hometown heroes. Those types of things are useful in context, but your coverage at PlasticSax.com is more like something you'd get from a DownBeat or New York Times in reporting about the music. As good (and as deep) as our scene has always been since I've been back here, we need more of that type coverage too, I think.