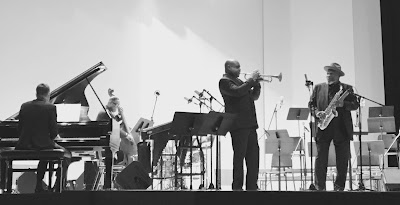 Mitch Butler dulled the luster of the Bobby Watson Tribute Concert at White Recital Hall before the first note was played on Tuesday, November 19.  The Assistant Teaching Professor at UMKC and the director of one of the two student bands on the bill revealed that additional tributes to Watson would take place on February 28 at Grand Street Cafe and on April 14 at the Folly Theater.

Most of the friends and family of the three dozen students performing at the concert didn’t flinch.  As one of the dedicated Bobby Watson enthusiasts among the audience of 400 who paid $8 to attend the event in honor of the man who transformed the Kansas City jazz scene during his recently concluded 20-year tenure as the William and Mary Grant/Missouri Distinguished Professor in Jazz Studies at UMKC during the past 20 years, I was startled by the unceremonious tone of Butler’s significant announcement.

I was still processing the news when the UMKC Jazz Ensemble directed by Aryana Nemeti tore into Rob McConnell’s arrangement of “Just Friends.”  Watson and members of Horizon joined the big band on separate selections.  Witnessing the young men in the trumpet section smile appreciatively as Terell Stafford soloed and guitarist Zak Jonas react to pianist Benny Green’s deft comping with awe was delightful.

A performance by Horizon- this edition of the fabled group consisted of Watson, Stafford, Green, bassist Carroll Dashiell and drummer Victor Lewis- followed.  The good cheer and comradery among the five men was matched by their jubilant form of hard bop.  Knowing that nothing was likely to top Horizon’s 35-minute outing, I left at intermission.  (Horizon setlist: Country Corn Flakes, Heckle and Jeckyl, Falling In Love With Love, E.T.A., outro theme)

(Original image of Benny Green, Carroll Dashiell, Terell Stafford and Bobby Watson by Plastic Sax.)
Posted by Happy In Bag at 10:37 AM