Album Review: The Myers Swingset- The State of This City 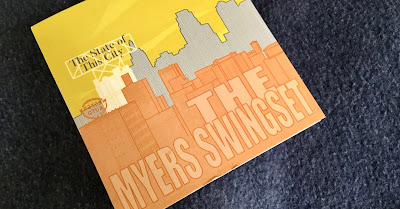 The provocative title of The State of This City, the new album by the Myers Swingset, demands a forthright reckoning.  Pianist and bandleader Jackie Myers, saxophonist Mike Herrera, bassist Sam Copeland and drummer Jim Lower provide a high-definition aural snapshot of the music most commonly performed in Kansas City jazz clubs.

Myers’ 2018 album The Instrumental One is an uncommonly hazy document, but the Texas transplant and the three stalwarts of Kansas City’s scene offer a buttoned-down form of jazz on The State of This City.  The album may be unapologetically mainstream, but strong melodies and unfailingly swinging arrangements deter tedium.

Myers is the least assertive member of quartet.  Her largess allows Herrera to sound like one of Cannonball Adderley’s worthiest disciples.  His contribution to the funky “Song for Lydia” is particularly rewarding.  Copeland’s heartfelt bowed solo on “Ice Elation” is a thing of beauty.  Lower is unleashed on “Modal Logic.”  And Myers earns bonus points for the ingenious title of “Ernestly Melting”.

The audience at the live recording is the most troubling aspect of The State of This City.  The lackluster response of what seems to be a couple dozen people at the Green Lady Lounge Black Dolphin sounds as if hostages are being forced to applaud at gunpoint.  Their timidity belies the setting.  Local audiences demand expertly performed straight-ahead jazz.

The State of This City doesn’t contain a single surprise or unexpected turn.  Uniform consistency is also precisely what’s prized at Kansas City’s ballyhooed barbecue restaurants.  It’s indicative of the conservative nature of the region.  The jazz scene looks and sounds much different elsewhere, but adherence to convention and dedication to decorum continue to define the state of this city.

(Original image by Plastic Sax.)
Posted by Happy In Bag at 11:56 AM