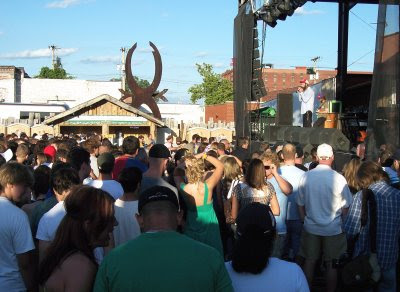 (Original image of a Friday afternoon reggae performance by Plastic Sax.)
Posted by Happy In Bag at 2:15 PM

People want to hear jazz in a concert setting. All of our local jazz concert series...KCJO, Folly Jazz, Jammin' at the Gem, Tim Whitmer's SATJ have a consistent 400 to 1000 attendees season after season.

Jazz does not have the mass appeal that the other musics you mentioned have. I'm not sure we want ot to. One thing I've noticed in the clubs is that there is very little attention to the quality of sound coming from the PA and often the pianos are out of tune. The attention to detail is not always the there. Jazz musicians also need to make sure that the audience gets their moneys worth.

Jazz will continue to evolve in after hours night clubs but will sustain a long shelf life if it is presented in the concert hall.