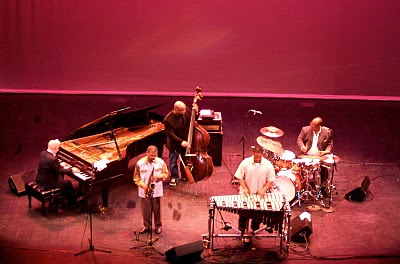 *An invaluable ten-minute feature on Claude "Fiddler" Williams was recently uploaded to YouTube by KCJazzLark. The 1990 footage also catches glimpses of the Gem Theater prior to its renovation and the sorely missed City Light jazz venue on Wornall Road.

*Mike Metheny is the subject of an excellent ten-minute podcast.

*The jazz establishment in San Francisco seems to be thriving. A $60 million structure will be built to house SFJazz. (Tip from AZ.)

*"I think she is probably the greatest female jazz player who has ever lived," says Virginia Mayhew of Mary Lou Williams. May 8 marked the centenary of her birth. NPR hosts an impressive compilation of their pieces on the one-time Kansas Citian here. KCJazzLark also recognized the date.

*"That's why jazz is dying," is the second sentence uttered in a video that appears to have been commissioned by the Mutual Musicians Foundation.

*Steve Penn notes that the big new sign in the Jazz District is finally being erected.

*A great photo of Clark Terry accepting an award from the American Jazz Museum's Greg Carroll is provided by St. Louis Jazz Notes.

*Shay Estes was among the musicians featured in "The Oil Boiler." Tim Finn has the story.

*Here's the Star's review of Pat Metheny's concert at the Uptown Theater. And here's the positive spin Metheny's record label put on the same review. The author of the Minnesota-based jazz blog Bebopified was similarly confounded by Metheny's performance two days later.

*"Kaycee jazz seems to have faded from the collective consciousness. This station is my small attempt to remind us of what happened in the forgotten fourth cradle of jazz." Listen to "Uncle Milton"'s Live 365 online radio station here.

*Musician and blogger Ellery Eskelin dug up an old magazine article featuring Lester Young. It's titled "How To Make a Porkpie Hat."

*The American Jazz Museum would like you to know that they own 1944 footage of the late Lena Horne singing with Teddy Wilson. You can visit them at 18th & Vine or watch the clip here.

*Tony's Kansas City offers one of the best and most accurate descriptions of this site I've encountered: "Plastic Sax has the most interesting reviews of people I've never heard of."

*A helpful Plastic Sax reader pointed out that Marilyn Maye once recorded a campaign song for Kansan Bob Dole. It's part of the collection on display in the museum of the Dole Institute of Politics at the University of Kansas. The facility is open Monday through Saturday from 9am to 5pm and Sunday from noon to 5pm. Admission is free.

(Original image of Christian McBride and Inside Straight by Plastic Sax.)
Posted by Happy In Bag at 11:15 AM