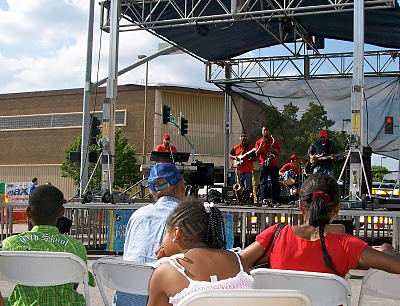 *Jason Harper wrote a fascinating account of the demise of the Kansas City Kansas Street Blues Festival. The annual event typically featured a smattering of jazz artists. Here are my notes on last year's festival. I also covered the proceedings in 2008.

*Kevin Mahogany has a new record label of sorts. Mahogany Digital "is... a progressive recording label that seeks to embrace the electronic age." (Tip via St. Louis Jazz Notes.)

*The remarkable story of vocalist Gab Harris is recounted by the Kansas City Kansan.

*KCJazzLark soldiers on with his saga about the creation of the American Jazz Museum.

*The Charlotte Street Foundation awarded Brad Cox of the People's Liberation Big Band a grant of $6,500.

*Dean Minderman of St. Louis Jazz Notes is saving me a lot of work by compiling the latest reviews of Pat Metheny's tour.

*"Kansas City, after all, is not the jazz town it once was," writes theater critic Robert Trussell. His observations on the national impact of local theater are interesting.

*A Sons of Brasil concert is streaming at KANU's site. (Tip via Phil Franklin.)

*"I’m from Kansas City. Jazz and blues are as much a part of me (at least in the attitude) as classical is," vocalist Nathan Granner tells an opera blogger.

*The interactive version of the New York Times feature on Kansas City mentioned in this space last week includes a photo of Diverse performing at the Czar Bar with Les Izmore. Three members of Diverse are currently touring France.

(Original image by Plastic Sax. The R&B band pictured played some Grover Washington, Jr,. at the Troost Avenue Festival on May 22.)
Posted by Happy In Bag at 2:19 PM