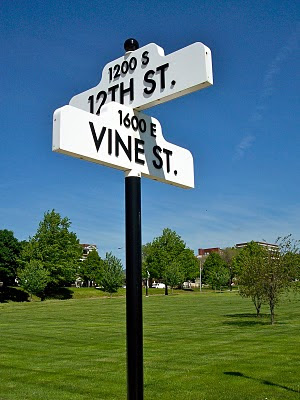 It's hard to hate an attractive park. Yet I loathe Paseo Green.

The corner represents much more than a Leiber and Stoller lyric from a Wilbert Harrison hit. It was once one of the world's premier musical destinations.

Here's the text on a plaque at the site:

Established in 2005, the grand piano-shaped plaza celebrates the intersection of 12th and Vine and the song "Kansas City." The piano monument base, nestled in the heart of the treble clef at the center of the park, serves as a platform for a featured sculpture that embodies the spirit of 12th and Vine. The park is designed to be a work-in-progress with a new sculpture commissioned every few years. Existing sculptures will then be placed throughout the park creating a sculpture garden. Linking Kansas City's past and future, the Goin' to Kansas City Plaza at Twelfth Street and Vine allows visitors, once again, to be standin' on the corner of Twelfth Street and Vine.

The original "piano monument base" remains the park's sole sculpture. I really don't care about that broken promise. A thousand sculptures couldn't begin to repair the tragic debasement of the celebrated location. 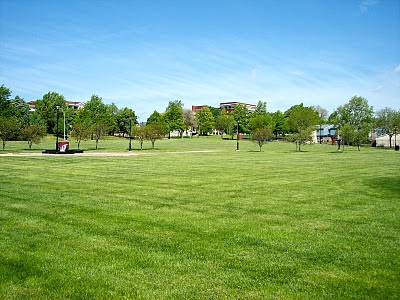 (Original images by Plastic Sax.)
Posted by Happy In Bag at 7:08 PM

that seems to be your most common lament, "Is Kansas City really a jazz town?" Who friggin cares? you can still go out and see decent music most nights of the week. Especially if you don't mind a wide variety of "influence" rearing its head in the middle of the set.

Seriously, those of us who are younger and hip to jazz didn't grow up listening to Frankie Trambauer or Basie or Mary Lou Williams, we grew up listening to The Police, Metallica, REM, and (as much as i hate them) Phish.

Just because we come to appreciate the art of the music as young adults doesn't diminish whatever contributions we are trying to make in the here and now, and I would venture to say, based on my experiences this last Sunday playing Cobra at the Record Bar, there are plenty of great players here in KC dedicated to making the music grow regardless of any sort of "official" sponsor.

As for the various institutions dedicated to preserving our heritage, you ever smelled how horrid a stench formaldehyde is? Institutional commitment to history usually has some underlying agenda behind the impetus, and usually it has to do with old, conservative white people not wanting to let go of their power.

I can bemoan the fact that the library at Alexandria burned down, but that wont change history. I can lament Trane's or Jimi's or Lennon's death, but playing what-if is such a solipsistic waste.

So ask yourself, what if Huey Long had been president instead of Roosevelt in 1932, and what if Bird had finished high school and gone on to become a dentist, and what if Tito Puente was actually a Cuban spy, and what if Miles was the heir to Jack Johnson. and finally , what if i just shut the f up?

I agree with your primary assertion. There is no shortage of great music performed in Kansas City on any given night.

To be fair, I realize that different generations have different sets of values. I just think that your average younger than 40 concert-goer has absolutely no idea how much of the past has been lost to the politics of any given generation. (look at the current Texas and schoolbooks hullaballoo)

and I presume that what happened to 12th and Vine is very much the result of an intersection of politics and economics, be they local or national.

thank the constituents, or lack thereof. and Happy, i didn't mean to come off such a douche. I read you blog faithfully, along with the other 12 of us.

Had 12th & Vine been preserved, Phonologotron, its presence would have had no impact- positive or negative- on the original music being made in 2010.

The historical and economic impact of its absence, however, is incalculable.

I thought this entry was relatively tame. Still, I expect and welcome agitated responses to my deliberately incendiary posts. Occasionally alienating all 13 Plastic Sax readers keeps me motivated.

Could be worse. When they paved paradise, they put up a parking lot. Looks like this place has much better drainage.

A parking lot would, in fact, be even worse.

I went down there the other day, for the first time in my 52 years of living hereabouts. And yeah, it was a severe disappointment to me and, I think, a somewhat milder disappointment to the two guys from Wisconsin who stopped by while on a music vacation to our town.

Kansas City made some horrible historic preservation "choices" during the 1970s and 1980s, such as tearing down the Rosilyn Hotel on Washington St. downtown (it was originally the home of Kansas City's first mayor) or tearing down an entire block of the mansions that made up Quality Hill. But one of the worst decisions was eliminating an intersection so integral to this city's identity.

The ageist insinuations of Phonologotron to the contrary, I'm too young to have visited the site when there was still a corner to stand on.

You're also relatively young, KCJazzLark, but do you have any memory of the buildings before they were demolished?

me ageist? I mean.. I only remember 4 different administrations in their entirety and was born halfway through Carter. So does that make me a young'n? Pretty sure there are several readers here who can go back at least as far as Johnson.. am i right?

Unfortunately, no. My earliest memories of 12th & Vine, predating my interest in jazz, is as an area of public housing with a reputation for crime. If I remember correctly, some of that housing stood where the park is now located.

Did you forget about your Frankie Trumbauer reference, Photologotron? (It made me laugh at loud.) I'm a Kennedy baby.

Kansas City began urban renewal efforts, tearing down large portions of the urban core, in 1953. By the late 1950s KC was considered a model for urban renewal. I don't have the URL handy, but there's an excellent 23 page study of KC and urban renewal on the internet.

I don't know specifically when buildings around 12th & Vine fell, but it was probably in the 1950s. The housing project put there was one of 6 KC developed: 3 specifically designated for white residents and 3 for black residents. That segregation can be hard to believe today, but remember that KC had separate black and white musicians unions until the mid-1960s.

That's part of what makes 18th & Vine so special. It was still a viable business district and therefore spared when so much surrounding it was felled. It's the last remaining neighborhood (there are individual buildings here-and-there) that was a real part of KC jazz's history.

A chart on page 20 shows that 12th & Vine was actually the last area to be "renewed", undergoing redevelopment from 1969 to 1972 (that's more in line with the plaque quoted).

Let me also backtrack on other speculation in my last comment. While public housing was built in the surrounding area, given the dates, I doubt that it was at 12th & Vine.

Thanks. Here's another telling bit from page 10 (emphasis mine).

My oarents owned The Orchid Room on 12th and Vine from 1957-1962. I am desperately looking for any photos of the club (interior or exterior) and have hit a dead end. If you have or know of anyone that may have some, PLEASE contact me.

Racial pun intended, 12th and Vine had a reputation as the one of the darkest corners of town. While the creativity flowed out of that intersection, so did the blood; no one was safe there, black, white, red, brown. Perhaps, though, pain is the true cost of art. What was it Henry Miller is reputed to have said? "He threw his girlfriend out the window? That's OK, he's an artist."