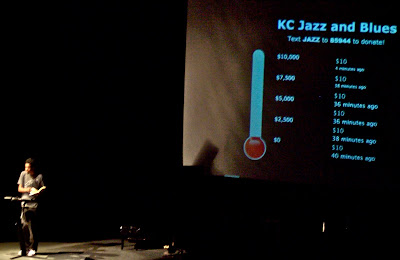 The girl can't help it.

Slated to play just twenty minutes at the Gem Theater, Marilyn Maye's hour-long set made everything else that transpired at Thursday's event seem like an afterthought.

Accompanied by pianist Billy Stritch, bassist Gerald Spaits and drummer Jim Eklof, the 82-year-old joked and sang for an audience of about 300. Now that Lena Horne has passed, perhaps among living saloon singers only Tony Bennett rivals Maye. Hearing Maye croon "The Song Is You," "Come Rain or Come Shine," "Mountain Greenery," "Blues In the Night" and "You Don't Know Me" was like stepping back in time. The great American songbook will, of course, remain after Maye and Bennett are gone, but the unaffectedly old school way of singing them will have vanished.

Maye is also hilarious. Here are three of her quips from Thursday:

"I met my first husband when I was booked in the Drum Room. I was a singer and he was a dancer. So we danced and sang together."

"We don't always play the exact proper melody. There's other notes to be had."

"Creative people like to drink. I know, because I had three very creative husbands."

Oh, by the way, there was also a film premiere Thursday. The thirty-minute "sneak peak" of Kansas City Jazz & Blues: Past, Present & Future was promising. I trust that the sound, sync and lighting issues will be worked out in the final edit. Talking heads included Greg Carroll, Frank Driggs, Chuck Haddix, Jayne McShann, Roger Nabor, Lindsay Shannon and Bobby Watson. David Basse delivers the money line. Leon Brady also has a memorable quote. Upon its completion the documentary almost certainly will become an essential document of Kansas City's music history.

On most any other night, a moment during Diverse's opening set would have been the highlight. Joined by saxophonist Matt Otto and pianist T.J. Martley, the band was tearing into Charlie Parker's "Now's the Time" when trumpeters Stan Kessler and Lonnie McFadden chimed in from the back of the theater. They strolled down adjoining aisles to join Diverse on stage.

Only Maye, however, was capable of representing Kansas City's past, present and future. She accepted an honorary trophy before her masterful performance.

"It's a lifetime achievement award," Maye noted. "But I'm not through."

(Original images by Plastic Sax.)
Posted by Happy In Bag at 3:22 PM

Do yourself a favor and catch Marilyn during her Jardine's stand in June, fans!