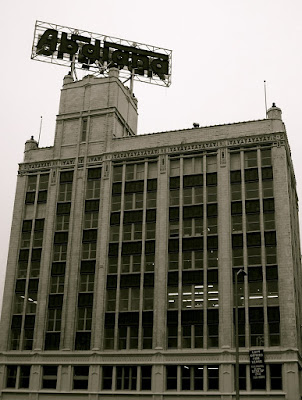 *KCJazzLark announced that he's been hired as Orchestra Manager of the Kansas City Jazz Orchestra. In a subsequent post, he appreciates the People's Liberation Big Band.

*Miguel DeLeon was interviewed by Susan B. Wilson of KCUR.

*KC Metropolis offers a review of Sachal Vasandani's concert at the Folly Theater.

*Streetside Records in Westport is closing in January.

*James Moody died December 9. The saxophonist's 2003 performance at the Folly Theater was his last in Kansas City. (I think.)

(Original image by Plastic Sax.)
Posted by Happy In Bag at 11:38 AM

The Folly concert had 400 people.

The KCJO the same night had about 1000 people.

The Christmas concert at Community Christian church had about 1000.
I've seen more teenagers and younger kids at these concerts too.

Concert jazz is alive and well in Kansas City I would say.

The Black House Improvisors' Collective concert at 1100 Main that same night (12/10) drew about 100 people. So by our count, that's an audience of 1,500 between three jazz shows last Friday.

It would be interested to see how Jardines and the Blue Room did.

What can we surmise by those numbers?