Doing Something Mean To It 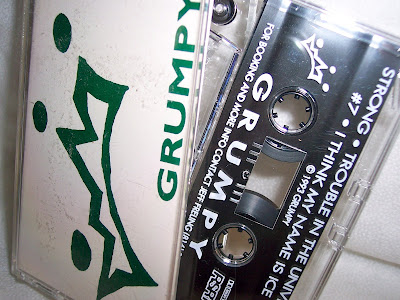 During the fascinating pre-concert discussion at the Folly Theater on September 25, a member of The Bad Plus defended his complicated relationship with jazz. He and his two band mates, he explained, had developed their passion for jazz in an entirely organic fashion. No one introduced them to the music. Instead, their innate curiosity led them to the genre.

I came to jazz in much the same fashion. And like the men in The Bad Plus, I retain my love of popular music. I don't trust any musician under the age of forty that hasn't listened to Kanye West's new album. It's disingenuous for contemporary musicians to insulate themselves from the culture at large. I don't necessarily want jazz musicians to emulate West's music, but they at least owe it to themselves and their audiences to know the score.

Crosscurrent, a Lennie Tristano-inspired band, perform at Jardine's tonight. Its music is excellent. Because a few of the band's members bear a faint resemblance to these caricatures, the band- at least in their current form- are unlikely to find a big audience. Crosscurrent's insistence on purity, while admirable, is confining.

I'll always prefer the guys who come from a background and mindset more akin to my own. A prominent Kansas City-based jazz musician, for instance, was a member of '90s rock band Grumpy. It wasn't a great band, but the musician's music today is undoubtedly richer for that experience.
Posted by Happy In Bag at 2:12 PM

Thanks for the mention and link - I always appreciate your support.

I like Kanye West, especially his stuff with Jay-Z . . . do you think Kanye knows who Lennie Tristano is? Would his music be richer for that experience? Does it matter?

Tristano never really had that big of an audience. He did what he did because he believed in it and it was fun - we try to do the same thing.

Tonight, Jardines was full with an especially attentive audience.

Those are some interesting Robots.

I appreciate what your saying, but I think it is unfair to assume that musicians who are into Tristano can't be into Kanye or visa versa. - Sam

Ask Steve about the hip hop album he recorded up in Sioux City...he's actually a big hip hop fan.

It would be cool if Kanye's new album came with a "I listened to MBDTF" button. That way we'd know who listened to it and who to shun.

I deserve that slap, Lee.

Crosscurrent's musical pursuits are nothing if not noble, Sam. Just as I've enjoyed previous Crosscurrent performances (including the debut of the band), I hope to catch you several times in 2011.

Wouldn't it be something if West sampled Tristano on his next album? The Tristano estate would certainly stand to benefit.

And finally, thanks for being so magnanimous.

Many jazz musicians listen to other genres of music besides jazz. It's great that they have come to know the world of jazz.

You've got to throw the stone to get the pool to ripple. :)

Kanye West is a good cat but it would take him many many years to play even one of Tristano's melodies. There's a big difference between popular music the art that furthers human culture.

Kanye West is obviously less technically accomplished than Lennie Tristano. He is, however, relevant to tens of millions of people, whereas Tristano is relevant to tens of thousands. I'm not suggesting that jazz musicians compromise their principles. Instead, I'm encouraging them to reject their often hermetic perspectives.

To each his own, I'll listen to a West album at the most one or two times... I'll listen to and have listened to Tristano's recordings countless times for years and years, for me, they never get old and there's always more beauty unfolding from them. I feel this way about Bach and Bird and many of the great composers and improvisers throughout history... I play jazz because I love the music and the art of improvising, not for mass appeal or popularity.