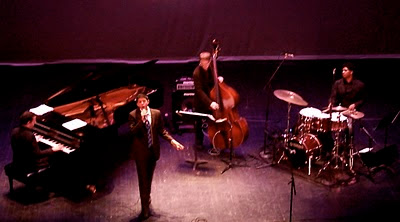 A couple years ago a Plastic Sax reader suggested that I reveal my personal musical preferences. I demurred. Keeping my tastes to myself seemed appropriate at the time. As this site has become more prominent, however, whatever veil of anonymity once existed has been shredded. Here are my favorite jazz albums and jazz performances of 2010.

(Original image of Sachal Vasandani at the Folly Theater by Plastic Sax.)
Posted by Happy In Bag at 9:11 AM

The only thing that comes to my mind is that the flagging economy must have made it a "light" year for album releases seeing that Hearts of Darkness is in such highly esteemed company. On behalf of the whole band, we're honored and humbled. Thanks for all of your support and encouragement.
Bob Asher
Hearts of Darkness)

Good job, Mr. Asher. I give your release thumbs up too for local and jazz album. Props to Johnson County Library for carrying it, too.