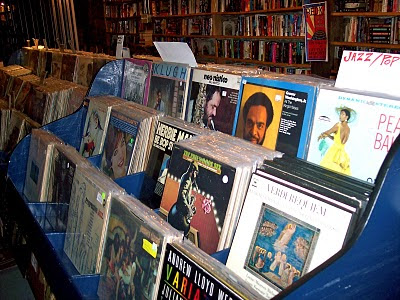 *Wayward Blog gets the scoop on a jazz "reinterpretation" of A Tribe Called Quest's Low End Theory at The Blue Room.

*NPR is streaming Bird Songs, Joe Lovano's tribute to Charlie Parker. The saxophonist appears at the Folly Theater on April 2.

*Here's a compelling video for an event that apparently takes place Mondays at the Kansas City Blues & Jazz Juke House. I'd link to the venue if it had a site.

*A couple new items have been posted at the home of the Black House Improvisors' Collective.

*Plastic Sax's Kansas City Jazz Calendar, while far from perfect, remains the area's best compilation of jazz-only events. (As always, musicians and club owners are encouraged to send me gig information. Listings are, of course, free.)

*Tweet o' the Week: kcjazzlark Jan 4 & The Phoenix has yet to update their online calendar. Guess they don't care if those who go out for music go there this month. Sad.

*From a JCCC press release: The country’s most celebrated Gypsy jazz ensemble, The Hot Club of San Francisco, will accompany four silent surrealist films in a night titled Silent Surrealism at 8 p.m. Friday, Feb. 4, in Polsky Theatre of the Carlsen Center, Johnson County Community College... The Hot Club accompanies these films with the distinctive music made famous by Stephane Grappelli, Django Reinhardt and the Hot Club de France. Tickets are $30... A free gypsy jazz guitar master class will be offered at 4 p.m. Feb. 4 in Polsky Theatre.

*From Brandon Draper: Drummer Brandon Draper brings The Willie Waldman Project to Jardine's! The name might not strike an immediate chord, but Willie Waldman is one you’ll find in the liner notes of artists and groups including: Snoop Dogg, Nate Dogg, Warren G., The Dogg Pound, Tupac Shakur... While the list goes on, there’s much more to this trumpet players credit than simply recording as a sideman... Joining the group on bass will be Eric Gould of the band Particle and Mickey Hart's Hydra and Brandon Draper on drums, percussion and electronics.

(Original image of Prospero's Books by Plastic Sax.)
Posted by Happy In Bag at 12:06 PM