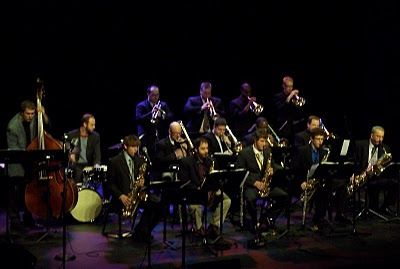 "This is jazz," Clint Ashlock told a reverent audience of approximately 125 Thursday at Polsky Theater. "It's OK- you can talk."

Just as I felt as if I was hearing New Jazz Order for the first time, I was finally able to give the effort of featured vocalist Megan Birdsall my undivided attention. Until Thursday, I'd never completely grasped that she's an old-fashioned stylist in the tradition of June Christy and Anita O'Day.

(Original image by Plastic Sax.)
Posted by Happy In Bag at 9:04 AM

Wow, thanks! Glad you enjoyed it!

And for the record, it wasn't the lack of talking, it was the excess of manners that threw me off. Manners?

Talking through a New Jazz Order performance is a Kansas City jazz tradition. I could never stop talking over NJO even when I was in the band.