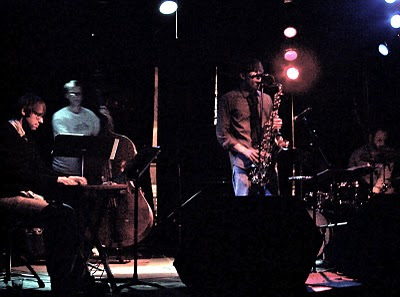 There's a tough new tenor in town. Steve Lambert doesn't look the part. The kid is as thin as a rail. I've seen the saxophonist play in a number of configurations, most notably as a member of Crosscurrent, but Lambert was a revelation as he led his own group Sunday, January 16, at the Record Bar.

Joined by T.J. Martley on electronic keyboard, Seth Lee on bass and Matt Leifer on drums, Lambert evoked Johnny Griffin, Eddie "Lockjaw" Davis, and yes, John Coltrane in a performance for an audience of about 25 during the evening's first set. While not nearly as burly as those jazz giants, Lambert possesses a strong tone and aggressive attack. There's no reason to think he won't continue to improve at a dramatic pace.

A rendition of Bud Powell's "Celia" was mainstream enough to please jazz traditionalists, but the most rewarding moments came when the quartet played with reckless abandon on original material including the shrewdly-titled "19th & Highland." I understand that Lambert will release an album later this month.

Lambert, incidentally, is not to be confused with this jazz musician with the same name. Alas, Kansas City's Steve Lambert is the one without a web site.

(Original image by Plastic Sax.)
Posted by Happy In Bag at 11:20 AM

Jesus, what did people ever do before they had a web site?!?!?