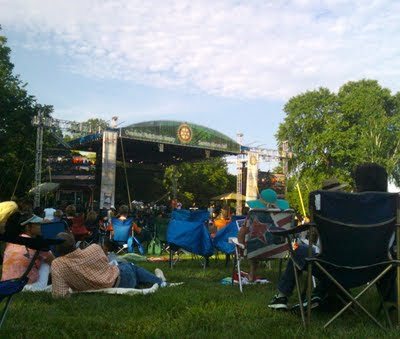 *Sue Vicory's film Kansas City Jazz and Blues: Past, Present & Future will be televised by KCPT on June 30 at 8:30 p.m.

*Sons of Brasil is appreciated by KCJazzLark.

*Via Facebook: Original Flavor: July 9 at Crosstown Station: This show will encompass elements of Hip Hop, Jazz and R&B, but it will contain a setlist of original material from the band and its vocal acts... The band will also collaborate with DJ Ataxic for a unique musical cover section. During this portion of the show, the DJ will spin an a cappella from a well known artist. The band will recreate the original musical composition behind the vocals. Participants include Dominique Saunders, Les Izmore, Reach and Diverse.

(Original image of last weekend's Jazz In the Woods festival by Plastic Sax.)
Posted by Happy In Bag at 2:15 PM

On your say-so, I went to turntable.fm. It asked for permission to "Access my data any time -- turntable may access my data when I'm not using the application." I said no. What makes it worth that risk?

Mark my words, Rick- you'll eventually end up spending a lot of time at Turntable.fm.