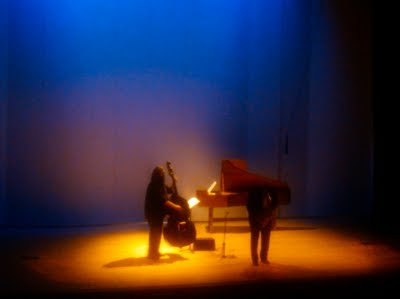 I paid twenty dollars to hear Jeff Harshbarger and Bobby Watson perform "Donna Lee." Their spectacular duet on the Charlie Parker composition was worth every penny. It was part of the Bach Aria Soloists concert Saturday at White Recital Hall.

While I liked the concert a bit more than Libby Hanssen, I generally concur with her proper review for The Star. She's right to suggest, for instance, that renditions of Guinga material like "Senhorinha" were a bit stiff, but the opportunity to hear Brazilian music in a Kansas City concert hall still represents a rare treat.

My primary criticism concerns a format that gave the concert an oddly disjointed feel. The musicians left the stage between each selection. Apparently mistaking an extended break after the second piece for intermission, several people in the audience of approximately 400 exited the theater. The unnecessarily complicated process killed precious momentum. It's another reason why, as Hanssen noted, the evening felt "more constrained than inventive."
One final note- I need more harpsichord in my life.

(Original image of Jeff Harshbarger and Bobby Watson by Plastic Sax.)
Posted by Happy In Bag at 12:16 PM

"Prince Albert" -- Watson, Harshbarger and Beau Bledsoe -- might be the most perfect piece of jazz I've heard performed live in my 50-something years. The thing I enjoyed most was the nearly silent audience, which meant I could appreciate the fact that there was little electronic amplification involved. It gave the music such a personal feel -- like these incredibly talented folks were performing in my living room. How I wish we could do that in clubs!

I agree, Anon. The Kenny Dorham piece was great. And the sound was ideal last night at White Recital Hall.

"And the sound was ideal last night at White Recital Hall." This is a sentence that has never been uttered before and most likely never will be again.

Wish I could have heard it!

Aside from Beau Bledsoe's guitar, Ben, no amplification was used. At least I think that's the case.

I assume what Leo is referring to as tradition is the "disjointed" format to which you refer. Such is the common format for classical recitals. As in the jazz world, a little background knowledge can greatly enhance one's appreciation and at the same time, prevent one from seeming ignorant.