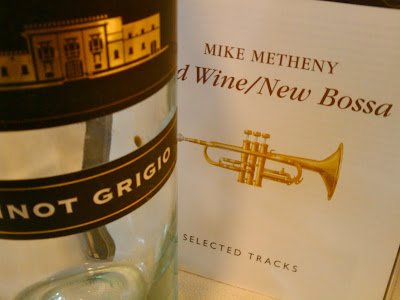 Most compilations are intended to serve as overviews of artists' careers. Old Wine/New Bossa: Selected Tracks, a handpicked selection of Mike Metheny's post-major label works, does something entirely different. The album seems like an attempt to reposition Metheny. It's a set of mood music of the highest order. Strange but entirely compelling, most of the album's dozen tracks are designed for sensual seduction.

The offbeat sensibility isn't limited to Metheny's tendency to use flugelhorn and EVI rather than trumpet. Metheny's version of "How Insensitive" is typical. Although he's backed by four of Kansas City's best straight ahead jazz players- Rod Fleeman, Paul Smith, Gerald Spaits and Tommy Ruskin- the track is more Mantovani than Roy Hargrove. Throughout Old Bossa/New Wine: Selected Tracks Metheny repurposes easy listening music, transforming vacant aural landscapes into sleek, sophisticated works of art.
There are a few exceptions. "Are You Real?" is a conventional jazz number. Tellingly, it's the album's least interesting track. "Manitowoc" represents its polar extreme. It sounds like the work of a lobotomized Valium addict. Even if the composition is Metheny's idea of a joke, it's still really creepy. "Manitowoc" is followed by "Deceptive Resolution," another synthetic tone poem that emphasizes Metheny's weird aesthetic. His jazz chops may be impeccable, but the new collection reveals that he's an intellectual outsider in the tradition of Martin Denny, Donald Fagen and Charlie Haden.

Old Wine/New Bossa: Selected Tracks isn't a proper jazz album- and it's all the better for its deliberate eccentricity.

(Original image by Plastic Sax.)
Posted by Happy In Bag at 5:03 PM

My better judgment is telling me to shrug this off and not take the bait. But when it comes to that level of maturity, I'm still a work in progress.

Reposition? No, it's too late for that now. The album is just a collection of tracks that are still holding up pretty well after a certain number of years. Also, like I recently told Jazz Online, "...there aren’t any moments on this one where I have to cough real loud at the exact moment of a big clam." (Although, there may be a few needed throat-clearings here and there during the leader's solos.)

I recently asked my hand to marry me... because it understands my many sensual attributes.

That bizarre comparison falls somewhere between laughable and insulting. I'm leaning toward the latter.

My hand just dumped me for betraying it. "Which are you, Mike?" it sobbed. "Vacant? Or sophisticated? I am so confused!"

Actually, that track is plenty interesting, mostly due to strong solos by Roger Wilder and Danny Embrey. It's a drag that you would find a way to trivialize their work.

<<"Manitowoc" represents its polar extreme. It sounds like the work of a lobotomized Valium addict. Even if the composition is Metheny's idea of a joke, it's still really creepy.>>

It's not a joke, it's not creepy, you are just another self-gratifying Professional Observer for being so triumphantly wrong... and, if you start dating my hand now, I will learn of your true intentions.

Synthetic? Weird? At least those labels were never applied to my work when I used to appear in Hearne Christopher's column, once published by your current employer and back when I was referred to there as "a saxophone player." But nevermind; that was during The Star's glory years, and I digress.

Martin Denny is God! "Exotica" is the Gospel! And it is impressive (as it was no doubt intended to be) that you were able to drop all three names into one sentence. A well-placed non sequitur is a terrible thing to waste.

Which gives me whiplash from yet another doubletake. Because, Bill, your tendency to pan then praise may be deliberate, but it is also eccentric, strange, and compellingly creepy. Kinda like a Hearne Christopher column.

But I should at least thank you for not seeking out the "earworms" in this collection. There are a few (in the aforementioned leader's solos), and you were kind enough to look the other way.

I'm sorry you feel that way, Mike. I'm also relieved that I didn't write a negative review. As our President often says, "let me be clear"- I like the album.

i think this review is complete b.s. man. you either liked the cd or didn't so why not just state that? take a side.

you write that metheny's 'Old Wine...' is "Strange but entirely compelling, most of the album's dozen tracks are designed for sensual seduction." are you kidding? it is not a strange album in the least - just read the liner notes and you will get the back story about the album and the music featured. it is pretty straight forward. and second, to say that the music is "designed for sensual seduction" is pretty lame and mocks the integrity of this music which btw is outstanding.

what are you smoking in that plastic sax man?

I do find the album strange. That's not a bad thing. My favorite new release of 2011 is Lagrimas Mexicanas by Bill Frisell & Vinicius Cantuaria. Guess what? It's weird. Or should I say "strange but entirely compelling." And since when is romance a bad thing? Maybe I should start assigning numeric Pitchfork-style ratings to my reviews. Mike's album would be a 8.6. Lagrimas Mexicanas receives a 9.7.

te he he he

In the spirit of quoting terrible Presidents with great quotes.

"It depends on what the definition of the word "is" is. Bill Clinton

Mike,
I enjoy all of your recordings. You are one of the most lyrical well springs of melodic line players out there. In fact you never repeat yourself. Just like Chet Baker, Bird and your brother.

Thank you, I really appreciate that. Just like I appreciate being included with three of my heroes, unworthy as I may be. As a matter of fact, that makes me feel so good, I may not need my regular Valium today. Thanks again. mm