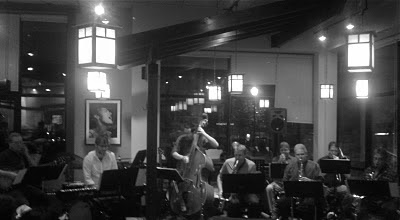 *Joe Klopus offers an insightful profile of Dave Scott. The trumpeter performs at the Blue Room on Friday.

*Culled from Facebook: The December 4 gig at the RecordBar serves an album release party for The People's Liberation Big Band. The collective's new recording is titled The Nutcracker and the Mouse King."

*Mark Southerland is a characterized as "a legendary jazz saxophonist from Kansas City" in a preview of a Jacob Fred Jazz Odyssey concert in Oklahoma.

*Michael Pagan provides a transcription of a piano solo on a track from his Three For the Ages album.

*Hermon Mehari provides a stream of a trumpet solo from a gig with KC Sound Collective.

*In his review of a hip hop concert, a presumptuous fool suggests that Tech N9ne has supplanted Count Basie as the definitive sound of Kansas City in the minds of most contemporary music fans.

*If you're not already excited about Roy Ayer's concert in January, maybe this will help.

*Tweet o' the Week: paynic: My next record will be called "I'm White". I'll cover jazz standards but take the swing out of it. Wait, that's been done already... #mfcomn (Nicholas Payton isn't local, of course, but no Kansas Citians on the jazz scene posted anything half as amusing this week.)

Nick Payton needs to stop spreading toxic bullshit like that.

I can't hold it against Payton. Of course it's not universally true, but in many cases, he has a point.

Many of us Whites could stand to approach the undeniably Black art form with a bit more respect and a bit less entitlement.

A lot of jazz played today makes me face-palm as well, so him being such a prominent keeper of the flame I can imagine his frustration.

I'm just glad that perspectives like his only grow more and more irrelevant. Jazz stopped being race music decades ago when the audience and players stopped being majority black.

He's a keeper of the flame of self flattering views about race.

Also I don't see him complaining about Vijay Iyer or Rudresh Manhathappa.

Anonymous Poster No. 1 here again, just to say that neither the color of Mr. Payton's skin nor his status as a "keeper of the flame" entitles him to say this toxic bullshit.

Again, I can't find much from above post that is arguable.

"Many of us Whites could stand to approach the undeniably Black art form with a bit more respect and a bit less entitlement." Hey Matt, what kind of CRAP are you laying out? Payton's remarks are pure racism but that's OK because he's black playing a black man's music? AMERICAN art form! He makes it sound like whites aren't worthy to carry the torch. Respect the art form, not the racists. BTW, note to Payton. I've heard some non-swingin' blacks in my day, too.

God damn, I always regret voicing my opinion on the internet, especially on issues that don't really concern me. I don't care to argue about it.

In my experience, in KC, there's not much of this going around anyway.

I second that emotion. I'll buy the CD's you play on. Sorry to see Nick Payton's tweet. Makes me sad. Won't be buying anymore of HIS cd's.

My comment is a bit misleading or it seems like it is. I agree with your regret about voicing your opinion on the net. I dig where you're coming from.

If you really read what I said, you'd see that never have I stated in this blog post, or anywhere ever, that White musicians can't swing or that all Black musicians can.

So-called Jazz is Black music. Period. Anyone who thinks I'm toxic and racist for saying it is most likely mirroring their own racist, toxic ideology.

All is I can say is: read. If I'm way off base and just an angry Black man, you should pay me no mind. You can say what you want about me, you can get mad about it, but what did I say that isn't true?

By the way, it is not possible for a Black man to be racist. Prejudice, yes, but not racist.

It's always these "Anonymous" folk who post the most venomous things in these types of chat rooms.

Unlike like some of you internet trolls and cowards, at least I have the courage to speak my mind and let it be known who's saying it.

In a thread on Facebook, we're having sort of the same conversation, except for everyone their has their name by their comments.

My main question is why do we have to worry about something being dead or not. Maybe I'm just not understanding the meaning behind it, but if there are musicians that are alive and being innovative and bringing the spirit of individuality and personal expression to music that has a lineage in what either used to be or still is called jazz, how can that music be dead?

A fellow musician says it's because the labels automatically plant preconceived notions in peoples' and inhibit them from soaking in the beauty of what's THERE. I think that's an amazing comment, and I even agree with it, but on the other hand, if that thing is beautiful and someone wants to call it "jazz," is that wrong? I've heard Bobby Watson champion and claim to play jazz many times and to me, he plays some serious beauty that's alive and well. I just can't, in my mind, call it dead.

Shit, Bill - I meant to post that under my name, which I thought was my Google Account. It should be from Clint Ashlock.

Really Nick? A black man can't be racist? You are SO full of shit!! I'm Native American so I guess the black man is the only RACE there is. You are as ignorant as you are angry! Go spew your bullshit somewhere else. Better yet, go make some non jazz dead music.

I'm going to have to agree with Sam on this one Mr. Payton. The line between prejudiced and racist is semantic bullshit. Just because you "never said white people can't swing" doesn't mean that someone isn't going to come along and infer that you mean exactly that from the content of your tweet.

I read your little essay about how jazz is dead and you play modern new orleans music. Again with the semantics. I agree with most of what you lay out in that screed, but find the arrogance that comes with being confident in your level of artistry a tad off-putting. But you'll probably come back and say that you've earned the right to be arrogant, etc, because you've paid your dues. Which is fine, you can play a hell of a lot better than I.

But your disapproval is never going to stop me from eating your corpse one day, just like you ate Miles' and Trane's and Prez's and Hawk's and Pops' when you were young.

The well has been poisoned for quite some time now, and us kids with our Kool-Aid and refusal to drink your poison are all just mucking shit up real good aren't we?

If you guys don't mind I ran out of popcorn, so I'll just play through on this hole.....
#micahhermancdreleasefeaturingloganrichardsonmattottopatrickflynnattherecordbardec11ththereisstilllimitlesspotentialtobderealizedbythehumanrace.

I don't know what everyone is getting all upset about. White people clap on 1 and 3. It happens.

It's a cultural legacy that jazz educators can use to help teach kids to swing.

We are talking COunt Basie vs. Lawrence Welk. What side of that argument do you really want to be on?

If your starting thesis is that since you're black, you can't be racist and nothing you say is racist, that enables you to say all kinds of racist shit. Talk about a cop out.

Way to alienate your fanbase Nick.

You know that thing where you learn that someone's kind of a dick and then you can't really enjoy their playing anymore?

Everything else is opinion - and, everyone is entitled to have one. Whether we like it or not.

The conditions that create "the music" today are so much more impacted by a non-segregated society that "the music" seems very homogenized because so many cats are coming from the same schools. Using the same mouthpieces, horns, reeds and playing the same lines. That type of condition is not a "black, white, brown, red, green or blue" race issue. It is simply the dynamic of creating the music in the 21st Century and more of a global condition that we enjoy for the most part. Is it good or bad? I don't think anyone will truly objectively know for another 50 years or so...

Thirty years ago, I knew and associated with lots of working professional musicians who responded similarly (to some of the respondents in this thread) to comments made by a young Wynton Marsalis as being racist, largely because he stated historically documented things about race and the undisputed history of the music so bluntly and unapologetically. You didn't do that type of thing in the 1980s in the USA without being chided by our society.

Thus, I knew lots of cats who used this as an excuse to not "like" him and to "hate" his music - regardless of the fact that his music was/is valid in context - therefore, my opinions in this regard have been centered in several major paradigms, including ...

Not "liking" a cat because you don't like his/her politics? Now that's bullish!t. Creators of this music are supposed to be above that type crap.

Mr. Payton is entitled to his opinions and positions. He has paid the dues in life and music to have these validated in context. Most everyone who posts here are also equally entitled to their own positions and opinions as well. That's the way it has always been and always will be. To make a big deal out of a "tweet" is not good for the music.

Some people think "post bop" is the only music. Some think "free jazz" is the only music. Gimme a break. These issues, like the "tweet" that initiated this thread of posts, is like playing "Tic-Tac-Toe" - it is a circular argument that nobody "wins"...

Ummm - Not if both players can play the game. Tic Tac Toe is always a tie between players who always make the proper blocking moves. If you are not posting for the sake of an argument, t ry playing the game in this context and you will tie each time you play. Play against a pre-schooler and you will likely win "pretty easily".

*My continuing contribution to the PlasticSax.com thread that won't die...*

I worry about the kind of person who would think it necessary to send that tweet in the first place.

Better hope the poster in this comment thread is somebody posing as NP, because if it's the real NP, that's some sad, sad, sad shit.

How does that analogy work?

You compared this argument to that of winning tic tac toe, which implies that is is not possible to win tic tac toe, which is definitely wrong. You can only win anything if one person doesn't make the right move for whatever reason. To go along with the tic tac toe analogy, not everyone always makes the "proper blocking moves" as Nicholas has proven on this forum and most other forums he contributes to. The argument doesn't matter, but it is quite telling of someone's true nature when they rush to publicly defend themselves (in a very childish way) after not putting any thought into what he is actually saying.

Reading this thread is great fun! It's like watching someone shake up an ant farm, or pour some pepsi into the Sea Monkey's tank!

Last week, I hit and killed jazz with my car.